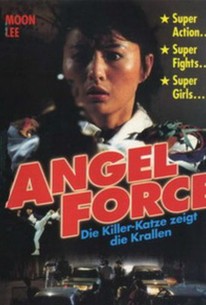 This jungle-set Hong Kong action film was directed by Wah San, best known for the cult classic sci-fi epic Infra-Man. There are few of that film's bizarre plot elements at work in this standard tale of two cops (Moon Lee and Wilson Lam) sent into the jungles of Burma to create a special team of highly-trained fighters to rescue a hostage held by the sadistic rebel commander Poison Owl (Johnny Wang). After Lam is severely wounded in a botched hit, Lee leads the troops through the thick undergrowth to Poison Owl's lair, unaware that there are other forces plotting against her. Hugo Ng is around as a demented Vietnam War veteran, and Yuen Bun handled the action scenes. If parts of the musical score sound slightly familiar, as many Hong Kong action scores do, it's another case of lifting music from an American film, in this case A Nightmare on Elm Street, Part 2: Freddy's Revenge.

There are no critic reviews yet for Angel Force. Keep checking Rotten Tomatoes for updates!

There are no featured reviews for Angel Force at this time.