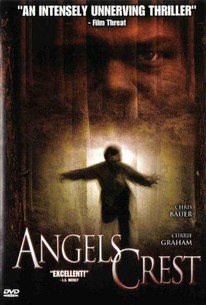 Friendship and revenge take on unexpected forms in this imaginative drama from first-time director J. Michael Couto. Teddy (Chris Bauer) is driving to the office one morning when he picks up his friend and co-worker Richard (Currie Graham) at the bus stop and offers to give him a lift. Teddy wants to take a detour and show Richard his favorite camp grounds, and when Teddy assures him that the top brass at the company will be otherwise occupied that morning, Richard agrees. After a short ride punctuated by pleasant but seemingly unimportant small talk, Teddy and Richard arrive in the woods -- and Richard collapses after a strong blow to the head. When he comes to, Richard discovers he's been tied to a tree, and Teddy informs him he has less than 40 minutes to live, throwing the events of the morning into stark and curious relief. Leading men Chris Bauer and Currie Graham shared a prize for Best Actor when Angels Crest played the 2003 Method Fest in Burbank, CA.

There are no critic reviews yet for Angels Crest. Keep checking Rotten Tomatoes for updates!

There are no featured audience reviews yet. Click the link below to see what others say about Angels Crest!