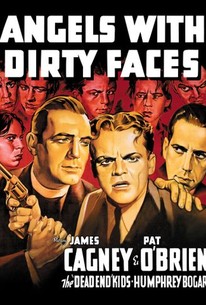 Critics Consensus: James Cagney's explosive charisma and Pat O'Brien's steadfast decency are a match made in heaven in this touching battle for a community's soul.

Critic Consensus: James Cagney's explosive charisma and Pat O'Brien's steadfast decency are a match made in heaven in this touching battle for a community's soul.

Close pals Rocky (Frankie Burke) and Jerry (William Tracey) flee after a robbery; Jerry gets away, but Rocky is sent to reform school. Years later, Jerry (now Pat O'Brien) has become a priest, and is working with a group of near-delinquents in his and Rocky's old neighborhood. Rocky had become a professional criminal, taking the rap for his whole gang at the urging of crooked lawyer Frazier (Humphrey Bogart) in exchange for $100,000 upon his release. Now Rocky is out of prison, but is stalled by Frazier. He meets Jerry again; when he learns the youngsters Jerry is working with admire him, he tries to get them interested in the activities that Jerry has set up for them. He also becomes romantically attracted to Laury Ferguson (Ann Sheridan), whom he'd also known when a boy, and who is now a social worker assisting Jerry. Even though Rocky knows Frazier plans to kill him, he accepts the $100,000 payoff from the crooked lawyer, and tries to give $10,000 of it to Jerry for his youth program. Jerry, however, knows the money has come from the blackmail of corrupt politicians, and so begins a campaign to reform city government. This leads Frazier and his accomplice (George Bancroft) to plan to kill Jerry. The furious Rocky kills them instead; he's arrested for the crime and sentenced to die. Jerry, knowing the boys still idolize Rocky, visits his old friend in prison and urges him to "die yellow" to help convince the boys that criminals aren't to be admired. Rocky refuses, but as he's led to the chair, he breaks down and begs for his life. Back in the neighborhood, the boys are deeply disappointed, but Jerry asks them to help him pray for "a boy who couldn't run as fast as I could."

Frankie Burke
as Rocky as a Boy

William Tracy
as Jerry as a Boy

Marilyn Knowlden
as Laury as a Girl

William Pawley
as Bugs the Gunman

David Durand
as Boys in Poolroom

Ralph Sanford
as Policemen at Call-Box

Galan Galt
as Policemen at Call-Box

Angels With Dirty Faces benefits from the Production Code because it forces the gangster film to acknowledge its nihilism.

Rocky Sullivan is riveting. His movements are quick and vital, his speech like machine-gun fire, his demeanor sharp and confident. He is all attitude and style.

An atonement for & a deconstruction of Cagney's bad boy persona in films like The Public Enemy that made him a star, emulating the essence of the Production Code with more grace & emotional weight than anyone actually involved with the code ever managed.

The weighty closing line triggers haunting reflections on chance, destiny, and the capricious nature of the universe.

If the Dead End Kids - complete with their Three Stooges routines and slaphappy slapstick - weren't involved, the movie could have moved more smoothly and featured a more focused message.

Angels With Dirty Faces is a very exciting gangster film. The scenario is by Rowland Brown and the direction is by Michael Curtiz, who has a fine sense of visual rhythm.

Although the movie trades heavily on gang-film staples, there's also ample comedy packed into the mix.

the way Angels With Dirty Faces balances hard-bitten gangster drama with warmly stage-managed religiosity gives us an entertaining period piece, one which shows that after more than sixty years you still can't go wrong with a Jimmy Cagney movie.

James Cagney is in top form as a gangster with with redeeming qualities in this well-directed, Oscar nominated picture from Michael Curtiz, who scored in 1938 two Oscar nods; Bogart and Raft are also good.

...most of all, it's Cagney: At the top of his game, the bad guy we have to love. He makes it all happen.

An archetype of 1930s and '40s gangster films. The plotting and melodramatic storytelling are stilted by today's standards, but classic movie lovers enjoy that.

William "Rocky" Sullivan is just a no good kid. Starting off as your average juvenile delinquent, he blossoms into a career criminal. His draw is quick and his name has adorned many a penitentiary charts. His childhood cohort Jerry on the other hand, grows out of his old ways and turns to a life of piety. After his most recent stint in the big house, Rocky has come back to his old haunt. Father Jerry and Rocky share a rich history, but their future appears to be heading in different directions. Rocky is still interested in making some dough, while Jerry is focused on turning around a new generation of delinquents. With this story, director Michael Curtiz touches on some serious issues. In a way, Rocky & Father Jerry represent patriarchs of two divergent paths. Both sure know the one that yields more material gain. But as lucrative as it may be, Father Jerry doesn't want the world building their fortunes on rotten foundations. Maybe I am assigning to much meaning to an old gangster picture, but I really feel like there is a good nature vs. nurture argument here. Is there an honorable James Sullivan deep inside? Or was he always destined to be Rocky? Do these kids have it in them to be stand up citizens? Or is it in their blood to be social pariahs? After all, this would have been a hot topic in America during this period in history. Juvenile delinquency was on the rise during the 1930's, disrupting a relatively stable American youth culture. This being the depression years, upward mobility wasn't always within reach. But with a life of crime, many felt that the sky was the limit. Criminals were often glorified for taking their piece of the American dream when it was scarcely available. Curtiz deconstructs these criminals in a very fascinating way. If these aren't good enough reasons to capture your interests, the bold & somewhat ambiguous ending will surely keep you thinking long after the credits roll.

This is my one of my favourite gangster movies. It's not the only movie with the story of two boyhood friends who grow up to be enemies, but it's the best of them. Plus, it has a great cast.

Michael Curtiz has made some great films, yet the only one that tends to be well received among film fans is his contender for the best movie ever made - obviously Casablanca (and Robin Hood, to a lesser extent). However, the man has a wealth of other influential classics under his belt that don't tend to get the recognition that they deserve, and Angels With Dirty Faces is one of those films. To sum the film up easily, one would say that it is a crime drama. However; like the best crime dramas, this one has multiple themes that elevate it from being merely a film about crime, to being a character study, a portrait of what it is that makes a hero and a condemnation of criminals on the whole. The story follows Rocky Sullivan and Jerry Connolly; two young New York thugs, the former of which is caught by the police and sent to a reform school, where, ironically, he learns to be a criminal. The latter escapes punishment and goes on to become a priest. The story follows these two men as they meet up as adults and have an effect on the lives of the kids of their old neighbourhood. The focus of the film is always centred on the neighbourhood. This allows Curtiz to show us the effects that Rocky's criminal endeavours have on the kids of the neighbourhood more effectively. This sort of narrative would be employed in later films, such as the critically acclaimed 'City of God', and works well here too. The way the film shows how impressionable young kids can be influenced by adults works brilliantly, and Curtiz is able to continue this theme up until the powerful ending. James Cagney would later go on to achieve major fame in the incredible 'White Heat', but here he shows us what the quintessential New York gangster would be like. His performance, in short, is incredible and easily ranks among the best gangster roles of all time. The rest of the cast do well in their roles, with distinct New York accents helping to firmly place the audience in the city that the film is taking place in. Furthermore, the film is economic in the way it's plotted and it's also very exciting, and therefore guaranteed to delight it's audience. Angels With Dirty Faces is an absolute cinema classic and quite why it isn't more famous is anyone's guess. Although not quite as good as Casablanca, this is a major notch in Michael Curtiz's filmography and I wouldn't have any qualms with recommending this to film fans at all.