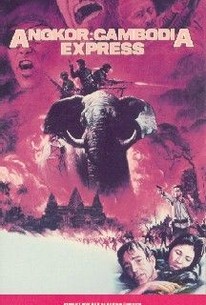 In a tale of drama and adventure, young journalist Andy Cameron (Robert Walker) has to get into Cambodia (it is assumed this is during the genocidal reign of Pol Pot). Cameron has to smuggle out his girlfriend Mieng (Nit Alisa) before she is killed (along with the other two million Cambodians), but he cannot manage this alone. He enlists the aid of an American Vietnam vet and the help of a few Khmer men. Eventually, Cameron makes his way into Cambodia where he encounters many dangers, some human and some inhuman (though the thousands of landmines that pose a continuing threat to a now peaceful Cambodia are not mentioned here).

There are no critic reviews yet for Angkor: Cambodia Express. Keep checking Rotten Tomatoes for updates!

There are no featured reviews for Angkor: Cambodia Express at this time.