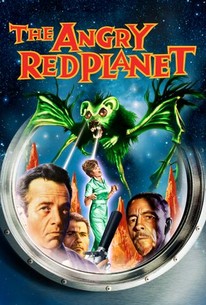 The United States space program reports that its missing, overdue manned Mars probe has returned to Earth orbit, but that they haven't been able to make radio contact with it. When it is brought down by remote control, they find three of the four crewmembers aboard: one of them, Professor Gettell (Les Tremayne), is dead; another, mission commander Colonel Tom O'Bannion (Gerald Mohr), is in a coma and suffering from some kind of alien infection; and the third, exo-biologist Iris Ryan (Nora Hayden), is in a state of shock. The ship's tape library seems to have been wiped clean of any record of what took place on the mission, and the doctors can't begin to save O'Bannion until they know what happened. In desperation, they decide to put Iris Ryan into a state of hypnosis, forcing her to recall the events of the mission. The bulk of the film is an un-narrated flashback in which we see the voyage to Mars and the quartet of explorers -- rounded out by technician Sam Jacobs (Jack Kruschen) -- proceeding successfully to a landing. As they draw closer to signs of intelligent life, however, the group also encounters increasingly dangerous creatures, including a man-eating plant, a giant bat-rat-spider, and a huge amoeba-like creature that consumes anything in its path. Sam is killed in an encounter with one of these menaces and O'Bannion is infected with an alien microbe, even as the ship is held fast by a powerful magnetic force. Gettell figures out a way to launch, at the cost of his own life, and Iris is left alone with the stricken O'Bannion on the journey back to Earth. The film concludes as the scientists find the one piece of information left on the ship's tapes, a warning from the Martians that the primitive, war-like people from Earth may not visit the planet again, except at risk to their lives. One of a relative handful of 1950s sci-fi films done in color, The Angry Red Planet did its rivals one better with the use of a special effects process called "Cinemagic," which gave the entire screen a deep red tint but also created the illusion of dimensionality (i.e. 3-D, sort of), and made the monsters look particularly eerie. The mixture of better-than-usual special effects, coupled with more than competent acting (Mohr, Tremayne, and Kruschen were veterans of mainstream films and television) helps make this one of the more entertaining space-flight stories of its period, though not quite in a league with It! The Terror From Beyond Space for sheer suspense.

The results are quite mediocre, although they can be appreciated with some sympathy. [Full Review in Spanish]

A science-fiction yarn, not much sillier than most of its competitors.

They don't make 'em like this anymore. It's easy to see why.

One of the many American International Pictures Sci-fi films to hit the drive - in theaters during the sixties. Is there some life form on Mars, maybe no the kind everyone thinks now days, but in 1959 Mars was Red so when we walked on mars during this movie everything was red. This is a film from the MGM Midnite Movie Series. Reason I watched it, The special effects are pretty cheap but he its 1959 and cheap was good. 4 stars

Nora Hayden is sexually harassed all the way to Mars and back. Worth seeing just for the rat-bat-spider!

Despite a decent cast, this 50s entry was poorly written and is neither exciting, suspenseful or that interesting. The red filter used on the camera lens while exploring on Mars was unique, but that alone does not compensate for this cheesy effort.