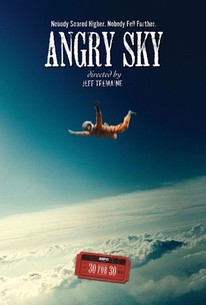 This documentary follows truck driver Nick Piantanida as he tries to break the world record for highest parachute jump in the 1960s by riding a helium balloon to great heights. Along the way, he attempts to launch the first civilian space program. Directed by Jeff Tremaine a co-creator of the TV series Jackass.

There are no critic reviews yet for Angry Sky. Keep checking Rotten Tomatoes for updates!

There are no featured audience reviews yet. Click the link below to see what others say about Angry Sky!