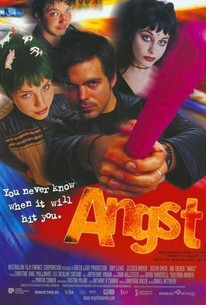 The romantic misadventures of a group of twenty-something Australians sets the stage for this independent comedy. Dean (Sam Lewis) is a guy fascinated by horror and schlock movies who works at a video store. He's just been dropped by his girlfriend Heather (Lara Cox) following an embarrassing incident involving one of her stuffed animals, and is now sharing an apartment with his friend Ian (Justin Smith) and Jade (Jessica Napier), a fellow film buff that Dean used to date. Dean offers Jade some sage advice as she tries to break off with her current boyfriend, while he looks for a new girlfriend of his own. May (Abi Tucker), a cute goth girl who rents at Dean's video store, seems like a good prospect at first, but he's still having trouble getting over Heather. Dean eventually finds himself looking for love over the Internet, while Ian uses the romantic travails of himself and his friends as fodder for his stand-up act; now all he has to do is work up the courage to actually perform in front of an audience. Angst was the first feature from filmmaker Daniel Nettheim, and was featured at the 2000 Melbourne Film Festival.

Abi Tucker
as May

There are no critic reviews yet for Angst. Keep checking Rotten Tomatoes for updates!

There are no featured audience reviews yet. Click the link below to see what others say about Angst!