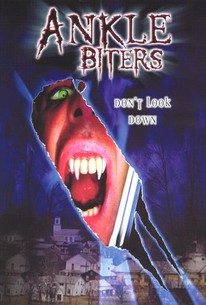 The situation looks bleak enough as it is when a small town is infested with a rare breed of dwarf vampires, but the horror doesn't truly rear its head until the diminutive undead come across a sword tainted with the blood of the last full-sized vampire. With the sword on their side, the dying race sets off to create a new breed of massive vampires -- by means of normal-sized human beings. Drexel (Adam Minarovich), a half-human, half-vampire who happens to reside in the same town sets off to stop the would-be mass vampire invasion from claiming more lives. ~ Tracie Cooper, Rovi

There are no critic reviews yet for Ankle Biters. Keep checking Rotten Tomatoes for updates!

There are no featured audience reviews yet. Click the link below to see what others say about Ankle Biters!