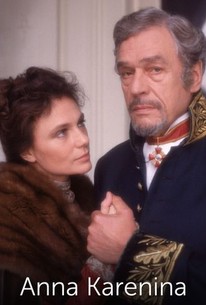 The best-known of the 12 filmed adaptations of Tolstoy's Anna Karenina include the 1936 Garbo vehicle and the 1947 Vivien Leigh vehicle. This made-for-TV version is every bit as elaborate and tasteful as those earlier efforts. Jacqueline Bisset makes her TV-movie debut as Anna, the wife of 19th century Russian nobleman Karenin (Paul Scofield). When she falls in love with the dashing Count Vronsky (Christopher Reeve), Anna runs afoul of the rigid social structure of the era-and of a husband whose anguish translates into revenge. The teleplay was by James Goldman, author of The Lion in Winter and screenwriter of another Russian-based period piece, Nicholas and Alexandria. Anna Karenina premiered March 26, 1985.

There are no critic reviews yet for Anna Karenina. Keep checking Rotten Tomatoes for updates!

Jacqueline Bisset gives a heartfelt reading of the great Russian heroine and is at perhaps the peak of her beauty having past her girlish prettiness and entered into an exquisite loveliness. The awesome Paul Scofield commands the screen every second he is present and makes the cuckolded husband's anguish and sense of betrayal and the cruelty that is the result understandable. Christopher Reeve cuts a dashing figure and gives it his best shot but his costars simply act rings around him. Try and see the full version which runs about 3 hours.