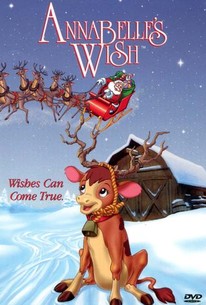 In this animated comedy/drama for the family, Annabelle (voice of Kath Soucie) is a calf who has a special wish for Christmas -- she'd like to be a reindeer and help Santa Claus drive his sleigh as he delivers his presents. Annabelle's friends tell her not to get her hopes up, but to everyone's surprise, Santa (voice of Kay E. Kuter) does indeed meet up with Annabelle, and the calf gets to help Santa make the holiday a special one for one young boy. Also appearing in the voice cast of Annabelle's Gift are Cloris Leachman, Jerry Van Dyke, Rue McClanahan, and Jim Varney; country music star Randy Travis narrates the story, and Alison Krauss and Nanci Griffith contribute songs to the soundtrack.

There are no critic reviews yet for Annabelle's Wish. Keep checking Rotten Tomatoes for updates!

Forced to watch this again and again by the kids....great if your 3