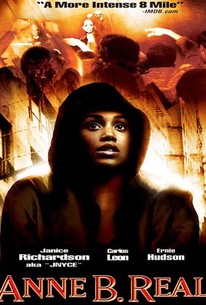 Cynthia (Ja Nice Richardson), a teenager growing up fatherless and impoverished in the city, spends her free time reading and writing rhymes. She carries around the tattered copy of The Diary of Anne Frank that her late father (David Zayas) gave her when she was a little girl. Her brother, Juan (Carlos Leon), a drug addict and dealer, steals Cynthia's rhymes, claims them as his own, and sells them to an up-and-coming rapper, Deuce (Eric Smith), who has a decent flow, but no writing skills of his own. When Deuce gets the opportunity to record a demo for a big-time producer, he pressures Juan to get him more material. Meanwhile, Cynthia's best friend, Kitty (Jackie Quinones), and a concerned teacher at her school, Michael (Antonio Macia, who also co-wrote the screenplay), find out about Cynthia's writing talent and try to encourage the introspective girl to share her gift with the world. Michael's efforts are complicated by his former relationship with Cynthia's older sister, who is a struggling single mother. Cynthia is courted, first by a good-natured small-time dealer, Jerome (Ephraim Benton), and then by a middle-class uptown teen, Darius (Geronimo Frias Jr.). She eventually learns that the increasingly desperate Juan has stolen her rhymes, and worse, and she decides to do something about it. Anne B. Real was the feature debut of co-writer and director Lisa France, who had previously worked as a stuntwoman. It was shown at the 2003 Urbanworld Film Festival.

Critic Reviews for Anne B. Real

There are no critic reviews yet for Anne B. Real. Keep checking Rotten Tomatoes for updates!

Audience Reviews for Anne B. Real

There are no featured audience reviews yet. Click the link below to see what others say about Anne B. Real!