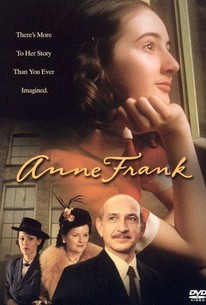 Anne Frank was an ordinary girl forced by circumstances to bear witness to the most extraordinary tragedy of the 20th century, and the diary she left behind became one of the best known and most affecting documents of those who struggled to survive the Holocaust under Nazi occupation during World War II. Anne Frank is a four-hour television miniseries that retells the well-known story of the Frank family as they hid from Nazi occupation forces in an attic in Amsterdam between 1942 and 1944, but it also takes a look at the life Anne and her family led before the pogrom swept through Germany and Holland, as well as the harrowing details of the grim fate that awaited the Franks in the Bergen-Belsen concentration camp. Hannah Taylor Gordon stars as Anne Frank, with Ben Kingsley as her father Otto, Jessica Manley as her sister Margot, Brenda Blethyn as Auguste Van Pels, and Lily Taylor as Miep Gies; the real-life Miep Gies, one of the Frank family's benefactors, served as a consultant to the producers of this project. Anne Frank (also advertised as Anne Frank: The Whole Story) was first aired by the ABC television network on May 20 and May 21, 2001.

Rudolf Pellar
as Registrar
View All

Director Robert Dornhelm carefully paces the story to convey the heartbreak as the layers of Anne's former life are stripped away by oppression.

It should be enough that it's all here: before the Nazis came, during the occupation of Amsterdam, all the way to Bergen-Belsen.

Lili Taylor overacts so horribly she all but ruins the movie.

Anne Frank. Had she not been subjected to extraordinary circumstances, this young girl might have ended up as your "girl next door". However, fate has its course. She aspired to become a popular person. And so she did, but not while she was alive. To be honest (as ever), I didn't quite like the whole story. The story of a young girl growing up didn't appeal to me, and most of us already know what Holocaust victims usually went through. The part showing how inconvenient the life of a group was during the hiding was a bit interesting, but not enough to make this TV movie a memorable experience. Ben Kingsley's performance is the most impressive among the bunch of actors. Taking all the aspects into consideration, I find it only fair to rate it 1.5/5.

When the war began, she was only a little girl. When it ended she was the voice of a generation. I like every version of Anne Fank.

This is an extraordinary true story and the saddest TV movie I ever seen as well as Anne Frank is one of my favourite biopics since I read the novel of her diary when I was in Year 8. Hannah Taylor Gordon is a revelation. She looks just like Anne Frank but,more importantly, manages to capture her wide-eyed optimism and indomitable spirit perfectly. It's truly heart breaking to see her at the end, her spirit finally broken and all her hope gone. Gordon is so believable in her role, it's almost scary. Ben Kingsley is also wonderful as Anne's father. You really believe they are a father and a daughter. The other actors are good too, but Gordon and Kingsley really stand out.