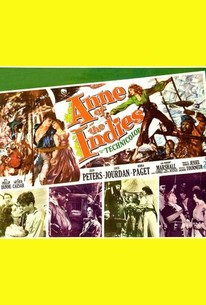 Jean Peters is at her feisty best in Anne of the Indies. Harboring a grudge against all men (and not without reason), Anne becomes "Captain Providence," one of the most notorious pirate leaders of the Spanish Main. Anne is pursued by French captain Pierre la Rochelle (Louis Jourdan), who intends to bring her to justice. To this end, La Rochelle makes romantic overtures to Anne, but she gloms onto his scheme and abducts the captain and his wife Molly (Debra Paget). After leaving her victims to die on a desert island, Anne relents and rescues them. She later fully redeems herself (at great personal cost) during a battle with her fiercest rival, Blackbeard (Thomas Gomez). Few actresses could have pulled off the contrarily-written title character in Anne of the Indies with as much determination and conviction as Jean Peters; surprisingly, the actress was reportedly never comfortable before the cameras, often insisting that she'd rather be a schoolteacher! ~ Hal Erickson, Rovi

Harry Carter
as Pirate
View All

Critic Reviews for Anne of the Indies

Anne of The Indies is like most pirate pictures -- colorful, action-packed and largely incredible.

An absolute masterpiece, a true enjoyment for the senses. [Full Review in Spanish]

A decent swashbuckler of a notorious woman pirate of the 17th century.

Audience Reviews for Anne of the Indies

swashbuckling fun altho it could've used more of the true story of the notorious anne bonny. jean peters gives a gutsy performance as the pirate queen and protege of blackbeard. interesting plot twists tho it eventually paints itself into a corner with an ending that doesn't make sense. this can be seen in the US free streaming on IMDb courtesy of hulu

Jean Peters proves she can swashbuckle with the best of them in this entertaining old school tale of piracy on the high seas. Jacques Tourneur paces it perfectly with just the right mix of drama and action, with a strong cast of colourful characters and well constructed plot. Louis Jourdan cuts quite a dash as the French privateer who melts her heart, Herbert Marshall puts in a memorable performance as the soused doctor who acts as her counsel, and the lovely Debra Paget makes a spirited beauty. Best of all it avoids cliches, and just when you think it's going to descend into sappy sentimentality, it turns around and surprises. One of the better swashbucklers out there (but don't read the synopsis as it gives the entire plot away. Doh.)

Anne of the Indies Quotes