Anne of the Thousand Days1969 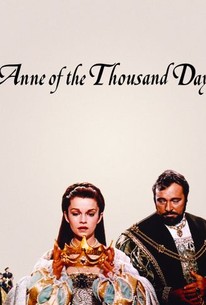 Anne of the Thousand Days Photos

This film adaptation of Maxwell Anderson's stage play concentrates on the romance between Britain's King Henry VIII and his ill-fated second wife Anne Boleyn. Anne marries Henry after he sheds himself of Katherine of Aragon. Anne's inability to produce a male heir leads Henry to look for more suitable mates.

Cyril Luckham
as Prior Houghton

Elizabeth Taylor
as Courtesan
View All

News & Interviews for Anne of the Thousand Days

View All Anne of the Thousand Days News

Critic Reviews for Anne of the Thousand Days

It is a story fit for the second Elizabeth, though it has perhaps one minor fault: the first two hours.

Some plucky performance don't manage to embue this historical drama with the regal spectacle the source material deserves.

Anne of the Thousand Days is a stunning-acted, sumptuous, grand-scale widescreen drama of the royal bed chamber and political intrigues that created the Church of England.

Interminable plod through the story of Henry the Eighth and Anne Boleyn.

One of those almost unbearably classy movies, like A Man for All Seasons and Becket, that have a way of elevating the reputations of moviemakers without doing much for the art.

It's about what you'd expect -- slow, dry, fleetingly intelligent.

The performances (by Burton and Bujold in the leads) are decent but the film is dull, overly long, and overwrought--the kind of Royalty picture that impresses Oscar voters.

Bujold gives a sweet and creditable performance, though, and Burton adds some humanity to a character often portrayed simply as a monster. Yet they cannot salvage this sprawling mess.

Audience Reviews for Anne of the Thousand Days

Henry VIII falls for Anne Boleyn, and ... well, you know. Of all the dramatizations of the Henry VIII story that I've seen (and that's almost in the double digits), Richard Burton is the most human Henry of them all. Sure, he gets Henry's antics, and there are enough scenes where Burton can strut and fret and be manly, but Burton shines the most when he's quietly imploring, full of human weakness and pleadingly hopeful that his illusions are his reality. The rest of the film is a dull effort, giving us no new insights into the story, and Genevieve Bujold is not worth sacrificing a kingdom for. Overall, it's Burton that keeps this film from being just another entry into the Henry VIII library.

I just caught this the other night on Turner's month of Oscar-related films marathon. If you know me, you know that I'm not Ricard Burton's biggest fan. I know I'm in something of a minority, but seeing him play such a jerk as Henry VIII does nothing to help his cause with me. I mean he was nominated -- although not by me -- as best actor for this role in 1969, but like Hoffman and Voight in Midnight Cowboy, Burton was also up against The Duke as Rooster Cogburn, so you just knew that John Wayne had to be the odds-on favorite -- as in the proverbial handwriting was on the wall.

I tell you, when Geneviève Bujold's head comes off at the end, there is nothing I want more than to see Henry's head come off instead. Especially with that disgusting final line about heading off to Mistress Seymour's home once he knows Boleyn is dead. I love the way the movie closes with Bujold's voice-over predicting that little Elizabeth, her daughter, will be greater than any English monarch before her. And arguably, that pronouncement became prophetically true.

Bujold herself was nominated for Best Actress, but for once I agree 100% with the Academy: Maggie Smith stands as the hands-down winner for her job in The Prime of Miss Jean Brodie.

I'm not really sure why Anthony Quayle was nominated for Best Supporting Actor. I think Jack NIcholson had a better chance for Easy Rider, and I'll 95% agree that Gig Young did deserve it for a great job in They Shoot Horses, Don't They?

I usually find this sort of historical drama fascinating to read about but a bit dull on film, though "Anne of the Thousand Days" is distinguished by the excellence of its performances. The story covers the rise to power and fall from grace of Anne Boleyn. It also contrasts the fluctuating fortunes of several of the key courtiers of Henry VIII, including Cardinal Wolsey, Sir Thomas More and Thomas Cromwell. Perhaps for budgetary reasons, we see next to nothing of the vanished Tudor London; the action takes place against a backdrop of National Trust/English Heritage exteriors and cardboard and polystyrene studio interiors. Interestingly, the spectacular cinematic potential of this turbulent age -- the reformation of the church, the dissolution of the monasteries, the burning of 'heretics' and the hanging, drawing and quartering of the treasonous -- is deliberately downplayed in favour of the causative machinations of a well-insulated court. I'm all for strong portrayals of women on film, but if the real Boleyn was half as insolent as Genevieve Bujold's I doubt whether she'd have kept her head as long as she did. Bujold never looked lovelier than she does here, and she and Richard Burton spar wonderfully well together.

Anne of the Thousand Days Quotes