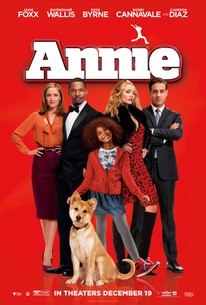 Critics Consensus: The new-look Annie hints at a progressive take on a well-worn story, but smothers its likable cast under clichés, cloying cuteness, and a distasteful materialism.

Critics Consensus: The new-look Annie hints at a progressive take on a well-worn story, but smothers its likable cast under clichés, cloying cuteness, and a distasteful materialism.

Critic Consensus: The new-look Annie hints at a progressive take on a well-worn story, but smothers its likable cast under clichés, cloying cuteness, and a distasteful materialism.

A Broadway classic that has delighted audiences for generations comes to the big screen with a new, contemporary vision in Columbia Pictures' comedy, Annie. Director/Producer/Screenwriter Will Gluck teams with producers James Lassiter, Will Smith & Jada Pinkett Smith, and Shawn "JAY Z" Carter, Laurence "Jay" Brown, and Tyran "Ty Ty" Smith with a modern telling that captures the magic of the classic characters and original show that won seven Tony Awards. Celia Costas serves as Executive Producer. The screenplay is by Will Gluck and Aline Brosh McKenna, based on the musical stage play "Annie," book by Thomas Meehan, music by Charles Strouse, lyrics by Martin Charnin, and on "Little Orphan Annie," (C) and (R) Tribune Media Services, Inc. Academy Award (R) nominee Quvenzhané Wallis (Beasts of the Southern Wild) stars as Annie, a young, happy foster kid who's also tough enough to make her way on the streets of New York in 2014. Originally left by her parents as a baby with the promise that they'd be back for her someday, it's been a hard knock life ever since with her mean foster mom Miss Hannigan (Cameron Diaz). But everything's about to change when the hard-nosed tycoon and New York mayoral candidate Will Stacks (Jamie Foxx) - advised by his brilliant VP, Grace (Rose Byrne) and his shrewd and scheming campaign advisor, Guy (Bobby Cannavale) - makes a thinly-veiled campaign move and takes her in. Stacks believes he's her guardian angel, but Annie's self-assured nature and bright, sun-will-come-out-tomorrow outlook on life just might mean it's the other way around. (c) Sony

Jamie Foxx
as Will Stacks

Ray Iannicelli
as Waiter at Domani

Michael J. Fox
as As Himself

Donnamarie Recco
as Woman on Street

Bobby Moynihan
as Guy In Bar

There's nothing wrong with reworking the score of Annie -- as this film does -- but too often, the movie seems a little embarrassed to be a musical at all, making it seem as if it's having a crisis of confidence.

The song selection and its presentation seems out of his control.

Though the old numbers are here, they're staged in an off-hand manner that lacks the excitement of John Huston's original.

A flattened, bowdlerised project that has passed through too many hands

Are you a little girl, aged between six and ten?... Have you learnt every song from Frozen and are you ready to torment your parents with a whole new repertoire?... congratulations, you are part of the ridiculously specific target audience for [Annie].

An attempt to recreate an icon for a new age but falls flatter than Miss Hannigan's high notes.

Quvenzhané Wallis is truly up to the task of playing the perceptively precocious Annie.

It's so earnest in its approach, so sugary sweet and good hearted that my cynical self gave way to its endearing wholesomeness.

I really hated it. It was so awful in so many regards.

Product placement has long been a scourge of Hollywood filmmaking, but Annie is the most egregious offender in recent memory.

I know I'm not the target audience for this. Honestly I watched it as I was intrigued by the gorgeous dog on the poster. (Hey,it's a valid reason...). I am old enough to have watched the original as a child. I liked it at the time, but it's not one I have rewatched over the years or have strong feelings about, therefore, I wasn't especially upset that Annie is now a little black girl with dark hair. I will say it didn't "feel" like watching Annie, it felt like a totally different movie. Maybe because of the missing iconic curly red hair. Actually, despite being a fan of red hair, I actually always hated the short red curls, so to me it was an improvement. This Annie still has short curly hair, but it looks cute rather than harsh on her. Hmm. .. I actually think they did an okay job of it. Considering. I don't generally do kids movies, but at no point did I feel like switching this off. I liked Cameron Diaz. She was hammy as,but it was funny. It gets a bit cloying at the end, but thankfully that's right at the end. I doubt I'll watch it again, but I could see this being entertaining viewing for a family with pre teen kids. (Or childish adults!).

Terriblay. Obviously a career vehicle for Quvenzhane Wallis who is lively and game but not as good of a singer or dancer as the other little girls in the ensemble. Cameron Diaz is laughably evil as Miss Hannigan, but she really throws herself into her musical numbers. I was hoping they'd do something worthwhile with the illiteracy reveal, like that Annie's letter never said that her parents were coming back; she just made up what she couldn't read and the other girls enabled her out of sympathy.

There's a good movie in the great idea of modern multiracial reboot of not only Broadway musical "Annie",but also there is a great remake based not only on the Broadway musical but also new elements that were more better than the 1982 movie version that it was based on. Unfortunately, it has some great moments but it falls short of the mark. The crazy multi-talented Quvenzhane Wallis(Best Actress Oscar nominee for "Beasts of the Southern Wild") is brilliant in the title role,but she is mired by the unclear update that is more hooked on consumer electronics and social media not to mention consist selfies. Not to mention the supporting cast which included the worst performance by an actress in cinema(hint....Cameron Diaz is NO Carol Burnett) along with the rest of the cast who give one-note performances especially coming from Jamie Foxx, Rose Byrne,and Bobby Canavale. The film is produced by the team of Will Smith and Jada Pinkett-Smith along with Shawn "Jay-Z" Carter and Beyonce Knowles who served as executive producers. Don't get me wrong here that this new version of "Annie" is very kid friendly and the musical numbers are great,but the Ms. Wallis' performance is dead-on target but the rest of the acting falls just short of the mark.

Not without it's moments, this film is poorly directed, acted, written, edited, and effortlessly shot, "Annie" (in every regard), is one of the worst films of 2014. Quvenzhane Wallis is a great little actress, and her breakout performance in "Beasts of the Southern Wild" was phenomenal, however, it almost feels like the cast stepped all their games down for this one. In fact, the syncing is all awkward on the musical numbers and I was cringing throughout most of the auto-tuned music. It makes the songs seem terrible, when in reality, the original lyrics are pretty fun in retrospect. I honestly wanted to stop this film halfway through, because if you know the tale of "Annie," you will see the outcome of this film coming from a mile away. In the end, I really hated my viewing of this picture, which is very upsetting, because I really liked the original film. "Annie" (2014) is easily one of the worst films of 2014, and I would not even recommend it to kids, families, or fans of musicals, because it is a failure in all aspects. "Annie" is trash.