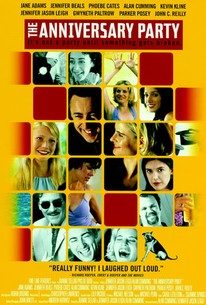 Critics Consensus: This Party features a killer cast and many funny scenes, but the movie feels like nothing more than an excuse for the actors to emote.

Critics Consensus: This Party features a killer cast and many funny scenes, but the movie feels like nothing more than an excuse for the actors to emote.

Critic Consensus: This Party features a killer cast and many funny scenes, but the movie feels like nothing more than an excuse for the actors to emote.

Taking place over the course of one night, The Anniversary Party is a serio-comic, sometimes scathing inspection of a group of friends. Joe and Sally Therrian have a party to celebrate several important junctures in their marriage: their sixth anniversary, their decision to start a family and their reconciliation after a yearlong separation. They have invited their closest friends, their past and current temptations, and (to avoid a lawsuit) their contentious neighbors. An unexpected gift sends the party spiraling out of control and unleashes an explosion of painful confessions. The celebration becomes a scorching dissection of a marriage on the brink.

Critic Reviews for The Anniversary Party

The acting is what makes this picture worth framing.

The best thing that one can say about The Anniversary Party is that it raises more questions about its central characters than it can possibly answer -- which may weaken it as a drama but not as a search for truth.

The result is something like being stuck at an audition for someone else's play, which you haven't read, won't invest in, and don't care too much about.

What distinguishes The Anniversary Party from the movies/lives that inspired it is the dead-on quality of much of the writing and acting.

As first film, it suffers from problems of most movies directed by actors: Big emotional scenes and indulgent acting, but it has some moments of truth

... it's fascinating to search for these characters' hearts under the layers of makeup, denial, disguise, excuses, fantasies, and ego.

Audience Reviews for The Anniversary Party

This is what happens when you let just anyone direct films...films like these.

There's something quite unusual about this movie. It's like the Big Chill for the new millenium.

I really liked it the first time I saw it. Not so much the second time.