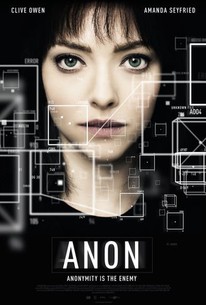 Critics Consensus: Lacking enough depth to fulfill its evident ambitions or enough excitement to work as a sci-fi action thriller, Anon lives down to its title in the most glumly predictable ways.

Critics Consensus: Lacking enough depth to fulfill its evident ambitions or enough excitement to work as a sci-fi action thriller, Anon lives down to its title in the most glumly predictable ways.

Critic Consensus: Lacking enough depth to fulfill its evident ambitions or enough excitement to work as a sci-fi action thriller, Anon lives down to its title in the most glumly predictable ways.

Sal Frieland (Owen) is a detective in a world with no privacy, ignorance, or anonymity; where everyone's lives are transparent, traceable, and recorded by the authorities; where crime almost ceases to exist. But in trying to solve a series of unsolved murders, Frieland stumbles on a young woman known only as the Girl (Seyfried). She has no identity, no history and is invisible to the cops. Sal realizes this may not be the end of crime, but the beginning.

Amanda Seyfried
as The Girl

The tone-deaf execution of the film - all flat-line delivery and awkward pauses - rather undermines the intelligence of the premise.

All we're missing is a story worth caring about.

Ends up like an episode of Black Mirror without the jokes. Or much of the drama.

Entertaining and intriguing - even if it provokes privacy concerns.

More potent as a cautionary tale than future noir, Anon's digital dystopia certainly gets a Like, even if it doesn't quite warrant a Share.

The weariness before the characters and the lack of concretion beat the notes of wit. [Full Review in Spanish]

Anon is one of those films where you imagine that the writer sat around thinking about how cool and edgy his script was, completely missing the fact that the story jumps around from scene to scene with very little cohesion or sense.

Tom McAdam
One Room With A View

Niccol's vision of modernity is strikingly dated while philosophically it has about as much substance as a Kanye tweet.

It should be a nightmarish ordeal; yet, for a film steeped in subjectivity and techno-voyeurism, Anon retains a frustrating, video game-style distance from their experiences.

There's enough bandwidth in the compelling, stylishly visualised concept to sustain it.

A tepid crime movie that uses technology and graphics merely to add a bit of zest.

The entry idea is that, in a world of more and more reliance on computer interfacing, soon computer interfacing will be everyone's reality, and so ultimately there'll be people creative enough who can hack your reality. Cool idea, right? But, going for some sort of Matrix-y noir feel, they let possibility slip through their veritable fingers and so ... late night snooze fest coming up instead.

Really good idea for a film carried out pretty blandly and badly.

There's always that one premise that comes along and impresses you to no end, but the execution may not live up to the promises that the film set up throughout the first act. Anon is one of Netflix's latest feature films to be released on their platform, but I truly believe this could've benefitted from a theatrical release and a little tuning within its script. Sadly, this is a premise that not enough audience members can probably latch onto and with not a very good execution, the marketing would've failed as well. I honestly had no expectations in terms of how I would enjoy this film, but I came out of it feeling both impressed and underwhelmed. Here's why you should check out Anon if you're a fan of fantasy or crime, but also why you might not want to, due to its overall execution. Imagine that you have video surveillance and the most advanced computer system that the world has to offer, all built into your mind and eyes. That's pretty much what this movie asks of you during its first few minutes. If that alone intrigues you, then I think you may share the same experience that I did. Following a team of detectives that rifle through first-person footage of numerous murders, almost like they are investigating in the style of playing the same level of a video game over and over again, this makes for a very interesting investigation throughout the movie and is definitely the right story to fit the world that has been built around it, but when your ending is just as ordinary as any other mediocre crime film, then what need should anyone have to watch it? I've always been a fan of Clive Owen and his performance here does seem to be inspired, but his character isn't given enough to do. I was caring about his backstory, due to flashbacks that are implanted in his mind that he replays throughout the course of the movie, but the backstory is really all his character is given to do. Amanda Seyfried plays the accused killer here and her story plays very well off Owen's. Personally, when these two would enter each other's minds, I found myself riveted by every second that would pass by. Sadly, I found the rest of the movie to be pale in comparison. The Fantasy/Sci-Fi genre has always interested me, so when a new, unique idea presents itself in the form of a feature film, I always jump on the chance to watch it. That being said, this is a film that leaves a lot to be desired in terms of surprises or an eventful climax. You sort of see where the movie is going by the time the film reaches act two and you realize who's good and who's bad. It's really more about exploring this world, but the idea that technology is built into us is about as far as they take it, not really exploring anything in detail, which felt slightly lazy. I never like a movie that starts out with a great premise and then fizzles out because they have nothing more to offer. In the end, Anon is a movie for fans of the Fantasy/Sci-Fi drama only, because those of you who like a good who-done-it should look elsewhere. You know who it's not and by the time the killer is revealed, it's like, really? I found myself scratching my head at how easily everything was resolved by the end and I have no desire to ever revisit this film again. So yes, the world itself is very unique and I would recommend checking it out for those who are impressed by that kind of thing, but the story is too basic and the end result seems like a cop-out. A unique and impressive world, held together by a very thin plot, with heavy dialogue as its coverup.