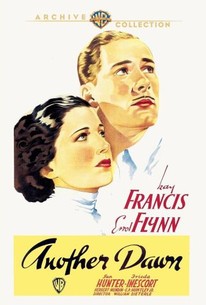 The title of this Errol Flynn vehicle sprang from an "inside" joke at Warner Bros. Whenever the studio depicted a marquee or poster of a fictional film in one of their productions, the film's title was inevitably Another Dawn. When time came to shoot this Flynn epic, the studio, stuck for a title, opted for Another Dawn -- and had to cast about for another phony film title whenever the necessity arose. An unabashed soap opera, the film casts Flynn as Captain Denny Roark, a British army officer stationed in a remote Sahara outpost. Against his better judgement, Roark falls in love with Julia (Kay Francis), the wife of his commanding officer Colonel Wister (Ian Hunter). Wister knows what's going on, but he is too much the gentleman to interfere, just as Roark is too much the gentleman to demand that the Colonel grant Julia a divorce. Wister finally does the honorable thing by volunteering for a suicide mission, allowing Roark and Julia to continue their romance unencumbered. About the only distinguishing aspect in this dreary exercise in restraint is the lush Erich Wolfgang Korngold musical score. ~ Hal Erickson, Rovi

Will Stanton
as John's Caddy

Clare Verdera
as Innkeeper
View All

Critic Reviews for Another Dawn

There's nothing very new about Miss [Kay] Francis' latest picture except the star's wardrobe. Even in the middle of an Arabian sandstorm, she's still the screen's best-dressed woman.

There are no featured reviews for Another Dawn at this time.