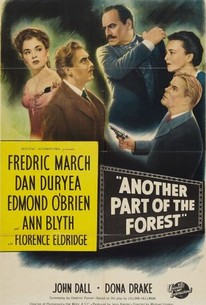 Another Part of the Forest Photos

Another Part Of The Forest begins some twenty years before the events of Lillian Hellman's play and movie The Little Foxes and shows how that film's Hubbard family became the ruthless, greedy lot they were. It's fifteen years after the Civil War, and the Hubbards dominate their small Southern town financially, if not socially; The patriarch of the family (Fredric March) sold salt for $8 a pound to the Confederate Army at a time when they needed it most. Edmond O'Brien and Dan Duryea play his sons, the former as mean as his father, the latter and younger one a weakling. When the elder child finds out that his father was responsible for the death of Southern troops during the war, he threatens to expose the truth unless the family fortune is placed in his hands. In the end, only Hubbard's wife (Florence Eldridge) stands by her husband during his inevitable fall, and she banishes her own children from their house. Brilliant acting by all, especially March, Duryea, and O'Brien, plus a sharp script, make this unrelentingly grim melodrama fascinating to watch.

Smoki Whitfield
as Jake
View All

Critic Reviews for Another Part of the Forest

Ardently acted, and directed with sense and tension by Michael Gordon.

There are no featured reviews for Another Part of the Forest at this time.

Another Part of the Forest Quotes