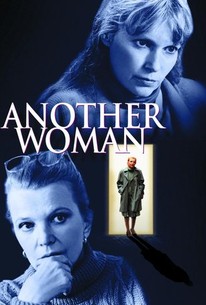 A middle-aged university administrator begins to eavesdrop on her psychoanalyst neighbor, and develops a particular fascination with one patient, a younger woman suffering from marital problems. These sessions lead her to recall a former love affair and reevaluate her own life in this reflective drama from director Woody Allen.

Critic Reviews for Another Woman

Perhaps Allen is now less like Bergman than he is like, say, Clint Eastwood, in the way he makes films to escape the kind of persona he used to have in films.

Film that emerges is brave, in many ways fascinating, and in all respects of a caliber rarely seen.

A piece of posturing phoniness designed to awe spectators who like their psychodramas third-hand and upscale.

Mr. Allen is becoming an immensely sophisticated director, but this screenplay is in need of a merciless literary editor.

The storytelling is fluid and dramatic -- almost theatrical -- the film glows with light and the design is economically artful.

Some movie-goers bewail that Woody Allen is turning his back on comedy. Comedy or tragedy, I regret the fact that he is turning his serious cinematic attentions on women.

A fascinating character study, mostly free of Allen's trademark neuroticism, yet ripe with some of his most astute introspection.

One struggles to find something to admire in this slight, wintry, austere film.

This melancholy drama is a tender, complex and affecting character study of a woman caught between middle-age regret and marital resentment.

Though not one of Woody Allen's strongest films, this Bergman-like psychological melodrama is too self-conscious and contrived, but the cast, headed by Gena Rowlands and Gene Hackman, is good.

Superbly written and directed by a film-maker at the peak of his creative power, and with a sublime performance by Rowlands to match, this film has not a joke in sight.

Audience Reviews for Another Woman

Not a film for everyone, but one that's well written and affecting, with some good performances on show.

Slow think piece but a dynamite showcase for the great talents of Gena Rowlands.

It's no secret that Woody Allen idolized Bergman (which shouldn't come as much of a shock, since lots of people, myself included, share the same sentiment). He has tried, with mixed results, to make a true homage to the legend with Interiors and September, but with Another Woman, he finally made a film that not only hits the examining, existential notes that Bergman hit routinely, but one that remarkably feels like a Woody Allen film in terms of its incredibly astute screenplay and beautiful staging. Some have called Another Woman a Wild Strawberries remake, but I would argue that it isn't a remake as much as it is a reimagining, or more to the point, a "repurposing" of the Bergman classic. It is a story of a university professor, played SPECTACULARLY by Gena Rowlands, in whom something stirs when she overhears a therapy session with a young 30-something woman who is discontent with her life. The professor, Marion, feels an emptiness rise inside her -- an emptiness that had settled there years before, that she can consciously feel now. Little by little, like in Interiors but better plotted in Wild Strawberries, the world she has constructed for herself, a cold, cerebral world, deconstructs. Marion despairs, enters into conflicts with herself, and questions endlessly trying to reason her way out of her malaise. But the cure for her malaise is not rational resolution and she, realizing that her strongest characteristic (namely her rational intelligence) is not enough to untangle what worries her, finds herself entirely helpless in the face of an unraveling existence. Her drama is very much like the drama of Professor Isak Borg from Bergman's film, a man on his way to receive a medal for his lifetime achievements. And, on the road, he also succumbs to the same malaise as Marion, the same questioning and the same painful re-evaluation. The horror shared by both Marion and Professor Borg, of course, is that despite their highly lauded accomplishments and their intellectual self-satisfaction, they feel a void. There must, in other words, be something else to life than strictly intellectual work, however satisfying it may be. Another Woman is a testament to the fact that Woody Allen was still at the top of his game in the late 80s. It is a brilliant, honest and perceptive film. It makes one wonder how different Bergman's films would have been if he didn't dismiss the visual sophistication that Allen spent most of his early career developing. In addressing the criticism of Another Woman, sure, a few beats feel contrived and forceful, but considering the heavy questions being posed, and the unrelenting commitment that Allen has to the material, this film had plenty of opportunities to fall flat on its face, and to its credit, it never does. In fact, it excels thanks to a fantastic script, brilliant performances, and a wise small dose of visual styling. This is Woody Allen at the height of his powers.

Marion: I wondered if a memory is something you have or something you've lost.  Another Woman is my least liked film from Woody Allen that I have seen. I found nothing to take away from it. It felt very much like a Woody Allen movie; just not as good of one. It had aspects that could make a great movie and already had. The plot borrows from Bergman's Wild Strawberries. The movie is extremely short and by the end it feels likes it feels never got going. From Allen, this just doesn't seem right. It feels like he had no great ideas that and year, but since he has to put a movie out annually, he just threw one together. I'm sure that's not accurate. I'm sure Allen probably liked what he had here and worked hard at making a great film out of it.  I'm still a big fan of Allen's work for the most part and that's probably why I'm disappointed with Another Woman. The cast is there and is pretty good. Allen's normal subject matter is there. But the movie never seems to be entirely there. It's like something was lost. Oh well, I guess I will just have to watch Hannah and Her Sister again to renew my faith in watching another Woody Allen movie.