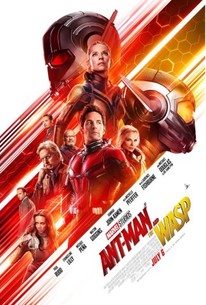 Ant-Man and the Wasp Videos

Ant-Man and the Wasp Photos

From the Marvel Cinematic Universe comes a new chapter featuring heroes with the astonishing ability to shrink: "Ant-Man and The Wasp." In the aftermath of "Captain America: Civil War," Scott Lang (Rudd) grapples with the consequences of his choices as both a Super Hero and a father. As he struggles to rebalance his home life with his responsibilities as Ant-Man, he's confronted by Hope van Dyne (Lilly) and Dr. Hank Pym (Douglas) with an urgent new mission. Scott must once again put on the suit and learn to fight alongside The Wasp as the team works together to uncover secrets from their past.

News & Interviews for Ant-Man and the Wasp

View All Ant-Man and the Wasp News

Critic Reviews for Ant-Man and the Wasp

Director Peyton Reed and his army of screenwriters haven't made "Ant-Man And The Wasp" a terribly clever movie, but it's clever enough to keep you from reaching for bug spray. And in the summer, Marvel has apparently decided that's all that's required.

If the previous film was a bubbly champagne cocktail of a superhero movie, its sequel is something flatter and more concussive-akin to a series of vodka shots. Bottom line though, as long Paul Rudd is invited, it's still a party.

It's featherweight fun that won't change your life, but that's perfectly OK.

Its intent is limited to amusing and diverting for a couple of hours of high-summer fun. That it does.

Ant-Man And The Wasp is an ideal popcorn flick that is perfect escapism. The film is heartfelt, hilarious, action-packed and is the first Marvel film to have a female superhero in its title!

It keeps the tone very light and funny, incorporates themes of responsibility towards your family, and it capitalizes on Paul Rudd's comedic charisma.

Amid all the fun and action of Ant-Man and the Wasp comes the example of what true love will give for another.

This sequel is much more more fleet of foot.

It's a lot weirder than the original film, but the ridiculousness of it all only adds to the fun.

Audience Reviews for Ant-Man and the Wasp

Light entertainment for those devoted fans of Marvel jonesing for a fix after Infinity War, Pt.1, and the Black Panther entries. There's nothing here to distract from anything serious over there, and that's the biggest failure, that they didn't even try to outdo themselves. This is a mid-level entry meant to be a mid-level entry, and they succeed in that regard. It's like you wanted a burger, fries and a coke meal deal but only got the french fries. Nonetheless, every thing is done well. Above reproach. Eh. They added Larry Fishburne and Michelle Pfeiffer, heavy hitters, and asked them to bunt. What?!?

Pretty much the definition of an okay movie. It's good for some giggles and action sequences, but not too much else. I can't say I am a huge fan of the Ant-Man series so far, the big appeal of this film was any answers to the ending of Avengers: Infinity War, and there really isn't much to that either. LIke the first Ant-Man, I probably won't remember this film when the third installment rolls around.

The hugely absurd, second-rate "quantum" science and the sloppy, harmless script are at least compensated by (relatively) effective action scenes and a (relatively) funny sense of humor, but the most ironic is that the only really interesting scene happens mid end-credits.

Ant-Man and the Wasp Quotes