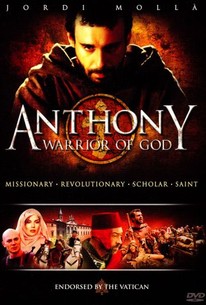 The story of the would-be Portuguese nobleman who rejected a life of materialism to become a Franciscan monk and stand up for the poor and oppressed comes to the big screen in this lavish hagiography starring Jordi Molla, Joe Capalbo, and Matt Patresti. Had he wanted, St. Anthony (Molla) could have lived a life of leisure. Though born to Portuguese nobles, the pious St. Anthony left it all behind in order to become a symbol of hope for the downtrodden and disadvantaged. His mind was sound, but his body was fragile, and as St. Anthony began his tireless campaign against injustice, Folco (Paolo De Vita) became his most trusted disciple. When greedy money lender Ronaldo (Damir Todorovic) used his wealth to enslave the desperate people of Padua, the revolutionary saint made a vow to defend the common people even if it meant taking the fight to the highest levels of society and the church.

There are no critic reviews yet for Anthony Warrior of God. Keep checking Rotten Tomatoes for updates!