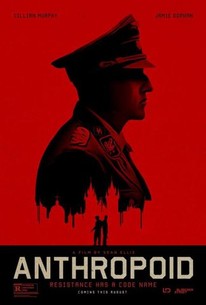 ANTHROPOID is based on the extraordinary true story of "Operation Anthropoid," the code name for the Czechoslovakian operatives' mission to assassinate SS officer Reinhard Heydrich. Heydrich, the main architect behind the Final Solution, was the Reich's third in command behind Hitler and Himmler and the leader of Nazi forces in Czechoslovakia. The film follows two soldiers from the Czechoslovakian army-in-exile, Josef Gabčík (Cillian Murphy) and Jan Kubis (Jamie Dornan), who are parachuted into their occupied homeland in December 1941. With limited intelligence and little equipment in a city under lock down, they must find a way to assassinate Heydrich, an operation that would change the face of Europe forever.

Sara Arnsteinova
as Woman at 44

John Martin
as Man at Assassination

In its final half-hour, it soars.

This smart, grown-up drama is one of those films that seems happier to start a conversation, rather than having the last word.

Ellis, who shot the film as well as directed it, has an acute eye for the ominous beauty of this occupied city and captures both the jagged terror of combat and its crushing, deathly boredom.

An intelligent, tough, and gripping movie.

Anthropoid is pulse-pounding action and I wish 2016 had more movies like this.

I think it is a good film. A tough watch but a moving story and well done

Although I was really interested in the subject, this film did fall a little flat for me. I think it will be hard to remember much about it within a few days. Unfortunately, this is not the film the real-life counterparts deserve.

It's a strange structure for a thriller, but it mostly works.

'Anthropoid' doubles as a WWII thriller and an important Czech history lesson .

The film is gripping and at times crackles with tension.

Anthropoid is one of those rare thrillers that actually educates viewers. The plot is based on the WWII operation to assassinate the Reich's third in command, Reinhard Heydrich. A group of Czechoslovakian soldiers chose to follow orders, a rather commendable action that the film throughly explores. Disregarding their own fates, they chose to do what they believed was the right decision made by government officials in London. They knew the power that Heydrich held in Czechoslovakia and was a valuable asset to the Nazi regime. The beauty of this film, is that I knew nothing about Operation Anthropoid. Having watched this I've taken several pieces of information away therefore proving to be a successful representation of the story. The cast were all pretty good, especially Jamie Dornan who conveyed that vulnerability really well. The legend though, and I use that word with great power, is Cillian Murphy. Possibly one of the most underrated actors working today, he was superb yet again. The more serious and level headed of the pair, he showed emotional conviction and a sense of authority. One thing I did notice was that the forced Czech accents were fading in certain scenes, I'm not the biggest fan of English actors putting on fake European accents. Sean Ellis was a solid director, the final act alone impressed me. Oh and the last five minutes...palpable. Some really beautiful cinematography and was able to capture the tension terrifically. The production design was also fitting, it felt like 1940's Prague and I couldn't tell if any green screen backdrops were used so it looked authentic to me. My biggest negative is the pacing. The first half is so slow and monotonous that I was convinced this was going to go no where. Second half? BOOM! Action, thrills, tension! Perfect for a big screen iteration. The third act is just relentless war...definitely captivating. I also wished the screenplay explored the consequences of the assassination attempt, there was just one scene. Overall though, a slow first half leads to a thrilling second half. Educational and exciting.

I enjoyed this lively take on a plot to assassinate #3 on the list of Nazis terrorizing Europe during WWll. Part of the reason why is the gentle underscore of fear throughout the piece and how it is a minute by minute battle to live with it, how demoralizing it is in the face of completing your assigned mission, particularly if your mission means certain death for yourselves. Riveting and provocative, the romances thrown into the mix only accent the action, not divert from it.

Flat characters and a slow plot hinder a dynamic tale from World War II history from getting off the ground. The acting was good, with fine (if unimaginative) costumes and hair styling, but otherwise the film lacks the polish one would expect from this type of film. If this film is trying to measure up to "Valkyrie", it has come up short.

It is mind boggling how many stories continue to be mined from the time period in which World War II took place whether they directly have to deal with certain events of battle or just repercussions of the German invasion that so many countries suffered from. While it is even more impossible to imagine the amount of stories that have yet to be told around interesting, fascinating, and downright terrible acts that came out of this period in history what makes this new film from writer/director Sean Ellis even more telling than its compelling story is the fact it delivers such a small and contained piece of that larger puzzle while at the same time still conveying how grandly devastating so many of the actions that occurred during WWII were. Anthropoid operates in this realm well, slowly initiating the viewer into its world and set of circumstances before we realize the full extent of what our two protagonists have really volunteered for. The movie takes a risk in not attempting to largely develop or humanize these characters until the second act of the film, but rather Ellis and co-screenwriter Anthony Frewin (who was an assistant to Stanley Kubrick on a number of films) use this first act to delve into the history of the situation and present it to the audience in a way that at first feels labored in that it's all work, no play. As we come to feel something for these people and as we come to know a more expanded cast of characters the sympathy builds as does the understanding for the purpose of the colder, but vital scenes that bring us into this mission. The history lesson is important, but more it is understanding the type of thinking that crafted these situations and as a result, our history as we know it, that is key to understanding the character choices and actions that come to take place in the third act of the film. We all know war is hell-even if we've never actively participated the history books and movies have told and showed us this countless times before-it is that Anthropoid is able to give a sense of the scope of that saying in its single, largely unknown account of these actions that makes it not only a story worth telling, but one that is executed in an entertaining and incisive enough fashion that it deserves to be seen as well. read the whole review at www.reviewsfromabed.com