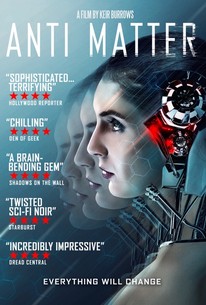 Anti Matter is science fiction noir. Ana, an Oxford PhD student, finds herself unable to build new memories following an experiment to generate and travel through a wormhole. The story follows her increasingly desperate efforts to understand what happened, and to find out who - or what - is behind the rising horror in her life. Directed by Keir Burrows and produced by Dieudonnée Burrows.

It Is Certified Fresh

Quibbles aside, the movie is consistently involving because it invites the viewer to explore the implications of this technological breakthrough alongside the main character.

You can practically feel yourself getting smarter while watching Keir Burrows' brainy feature debut.

Burrows' story keeps winding and meandering back to the same point... as Ana attempts to remember what has happened and to reconstruct her fractured identity. The results are paranoid and disorienting, if also - necessarily - rather repetitive.

From a purely visual standpoint, the second act of the film is great.

Anti Matter is a hugely ambitious film that soars as often as it falls flat. Yet, on a tiny budget and with a cast and crew made up of burgeoning talent, it is a film that must be admired for its aspiration and lofty intentions.

Anti Matter is a deeply involving film which uses its low budget as a strength rather than let it be a weakness.

Succeeds in raising questions about the nature of identity and exploring the implications of technology.

The cinematography, set design and score all work overtime to build the film's woozy feel, and Oxford's dreaming spires are the perfect location for this cerebral thriller.

Anti Matter is a sci-fi thriller that blends Jacob's Ladder and Memento with fascinating concepts.

Yaiza Figueroa shines in this mind-bending sci-fi thriller, that's worthy enough for fans of the genre. [Full review in Spanish]

All in all, this isn't bad for a micro-budget sci-if venture. Imagine if Primer was half as smart but had actual actors, sets, cinematography, and unjargonofied dialogue. Granted, it takes most of the first act to warm up to the amateur acting, but, unlike the aforementioned, beloved, indie time-travel flick, at least the actors attempt pathos past reciting their lines. Phillipa Carson, who brings to mind early Star Trek: TNG Marina Sirtis, plays a chemist who has discovered a method of phasing matter across the room via wormhole, and she gets her boyfriend and the cool goth hacker chick to test it out. With the threat of being beaten to a patent by Microsoft (?), Carson enters the wormhole, and, as you would expect while doing something scientifically dangerous, her life gets flipped-turned-upside-down. It's an interesting premise, and it keeps you guessing for most of the film. Unfortunately, curiosity abates gradually by the end of the second act as the movie falls into predictable tropes and leans hard on the weepy framing device. For a first time director, Keir Burrows shows that he has a lot of potential, opting for quick cuts instead of drawn out film-school masturbation. But his editing does become jarring too early on. As silly as it gets, I'm very glad they made this film. As much as we pine for original ideas, no worries, this one is ahead of the curve. There needs to be more movies like this one, but better.