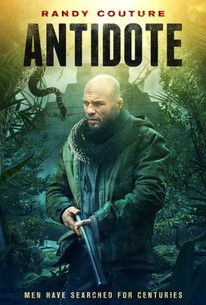 Dispatched to a village plagued by a deadly disease, Anna (Natali Yura) and her finace Manuel (Rafael de la Fuente) work tirelessly to relieve the suffering of the villagers. They soon come to learn that the villagers believe the White Witch brought the deadly disease. To save themselves and the village, Anna and Manuel are forced to team up with Victor (Randy Couture, THE EXPENDABLES 3) a cocky treasure hunter, who only wants to find the Lost City of Gold. The trio realize that the White Witch and the Golden City are viciously interconnected and that they must join forces to uncover the Mayan legend of the White Witch to have any hope of surviving.

There are no critic reviews yet for Antidote. Keep checking Rotten Tomatoes for updates!

There are no featured reviews for Antidote at this time.