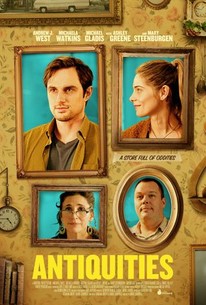 After his father's death, Walt moves to his dad's hometown to learn more about who his father was. He accepts a job at a local antique mall where he's introduced to the quirky world in which his dad grew up. There, Walt learns not only about his father, but a good bit about himself.

David An
as Chef Horita

Fran Austin
as Prior Finer Foods Customer
View All

Most viewers will engage enough with the characters in order to develop an emotional connection to the story. [Full review in Spanish]

Twee and tries too hard, but comes off -- like the pilot to an hour long TV comedy, "Northern Exposure" among Arkansas antiques dealers.

Without the talent demonstrated in this film, the narrative of Antiquities wouldn't hold up on its own. A sweet, wistful piece, it is difficult to ignore the agonizingly slow way it gets to its main point - forgiven only because of a strong ensemble...

There isn't all that much here to stick to your ribs, but its smooth finish goes down like a frigid limeade on a scorching afternoon.

A smartly observed film with a sweet centre, Antiquities takes old themes and polishes them up until they shine.

There are no featured audience reviews yet. Click the link below to see what others say about Antiquities!