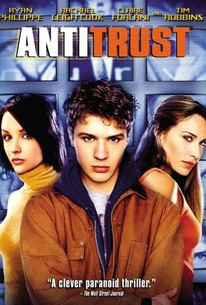 Critics Consensus: Due to its use of cliched and ludicrous plot devices, this thriller is more predictable than suspenseful. Also, the acting is bad.

Critics Consensus: Due to its use of cliched and ludicrous plot devices, this thriller is more predictable than suspenseful. Also, the acting is bad.

Critic Consensus: Due to its use of cliched and ludicrous plot devices, this thriller is more predictable than suspenseful. Also, the acting is bad.

Just how far should one man go to stay ahead of his competition? Milo Hoffmann (Ryan Phillippe) is a young and gifted computer software designer who with his close friend Teddy is about to launch a high-tech start-up firm based on Milo's inventive ideas in convergence, in which he's helping to create new ways for different forms of digital technology to work in harmony. However, before Milo and Teddy can get their company off the ground, Milo receives a very tempting offer from Gary Winston (Tim Robbins), a trailblazing genius in the digital world who has turned his company N.U.R.V. (which stands for "Never Underestimate Radical Vision") into one of the richest and most powerful computer firms on Earth. While Milo is sympathetic to Teddy's beliefs that computer technology should belong to the people and that open source software is the most promising future lies, Winston has long been Milo's role model in design and research, and Milo feels Winston's offer is too good to pass up. Milo and his girlfriend Alice Poulson (Claire Forlani) move out to Silicon Valley, and at first Milo thrives on the challenges of his new position, and develops a close working relationship with fellow designer Lisa Calighan (Rachael Leigh Cook). But Milo underestimates the ruthlessness of the leading-edge software industry, and he soon learns there's a sinister undercurrent to Winston's drive to stay on top. Antitrust earned rising star Ryan Phillippe his first million-dollar paycheck after well-regarded roles in 54 and Cruel Intentions.

Miguel de Icaza
as Himself

Scott McNealy
as Himself

Greg Armstrong-Morris
as Geek
View All

Got a by-the-numbers plot? A premise that's intriguing but also has holes in it? Dialogue that needs punching up? Hire Tim Robbins. He can save just about anything.

My, my, such a high-tech setting -- too bad it's marred by such a low-tech plot.

There's not an original note in Howard Franklin's screenplay or Peter Howitt's direction.

For much of its life AntiTrust relies on unhysterical thrills that are rooted in a highly credible set-up (a psychological cat-and-mouse game) and keep the audience guessing along with Milo.

Throws in everything and the desktop computer, and then chucks it all out the Windows 2000 with a storyline that makes less sense than the current state of tech stocks on the Nasdaq.

This wannabe thriller about the new techno industry is a misfire.

Silicon Valley story of good versus evil-sort of.

It won't win any Oscars but it might make 14-year-olds wonder whether it's really worth spending life in front of a screen.

Passably entertaining in spots, but doomed by its bungling of the thriller elements.

A thriller about creativity which doesn't display any of its subject matter.

This thriller in name only is all too characteristic of the cinematic scrap heap that is the first month of the year.

A thriller that starts out fun and likable but ultimately ends on a remarkably absurd note. Don't get me wrong, I enjoyed parts of it and I've definitely seen worse, but the end of this kept the stupid coming, and coming, and coming. The bright spots? Ryan Phillippe is routinely excellent (he has the ultimate "BS face", also seen in "Breach") and the film doesn't get too pretentious because it's evident it's just a fun little movie. Too bad they overdo the fun and crank up the cheesiness to an unbearable degree at it's conclusion.

This tale of a software writer who discovers the success of his Bill Gates-like boss and menor may be based more on treachery than talent, is unfortunately degenerates from topical drama to ludicrous thriller.

One of those movies I liked when I was still in college.