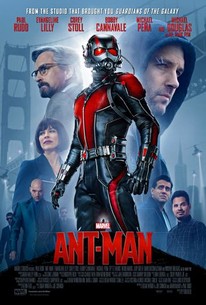 Critics Consensus: Led by a charming performance from Paul Rudd, Ant-Man offers Marvel thrills on an appropriately smaller scale -- albeit not as smoothly as its most successful predecessors.

Critics Consensus: Led by a charming performance from Paul Rudd, Ant-Man offers Marvel thrills on an appropriately smaller scale -- albeit not as smoothly as its most successful predecessors.

Critic Consensus: Led by a charming performance from Paul Rudd, Ant-Man offers Marvel thrills on an appropriately smaller scale -- albeit not as smoothly as its most successful predecessors.

The next evolution of the Marvel Cinematic Universe brings a founding member of The Avengers to the big screen for the first time with Marvel Studios' "Ant-Man." Armed with the astonishing ability to shrink in scale but increase in strength, master thief Scott Lang must embrace his inner-hero and help his mentor, Dr. Hank Pym, protect the secret behind his spectacular Ant-Man suit from a new generation of towering threats. Against seemingly insurmountable obstacles, Pym and Lang must plan and pull off a heist that will save the world. -- (C) Marvel

Hayley Gagner
as Pedestrian in Rain

Joseph Craig
as Raver
View All

Despite its absurd romantic storyline, and creepy crawlers, Ant-Man is a superhero film worth seeing. I don't think I've laughed so hard in any other Marvel film.

Ant-Man is a surprisingly nimble, enjoyable origin story with a little-guy-saves-the-day quality that will particularly appeal to younger viewers.

Is Ant-Man worth seeing? (As if my answer matters; like all Marvel movies, it'll make a mint.) Sort of.

Ant-Man has its charms, but they're frequently lost beneath a story that feels like a patchwork job. It's a fun watch, but also a frustrating one.

No other Marvel installment has felt as weighed down by its obligations to the franchise.

[Ants are] pests, and that's just a weird place to start for a superhero, especially if he never strays too far from his origins.

If you're a big fan of the ever-expanding Marvel cinematic universe, you'll love the addition of Ant-Man to the mix. If you're just out to see a movie and pick this one because it sounds weird and the show time is right, you're in for some laughs...

Ant-Man has problems, but still delivers a nice breather for the MCU.

A really fun heist film with a sci-fi twist that has plenty of heart to go along with the humour, it's just a shame that the antagonist side of things is rather dull...

It's as though the film is so eager to let you know that it is aware of your concerns that it forgets to put in the effort to fully dispel them.

This fun, delightful movie - the last of Marvel's Phase Two - has some great performances (Paul Rudd always so charismatic) and relies on a delicious sense of humor that goes so well with the action scenes and the kind of irreverent superhero story it wants to tell.

Surprisingly good for a film about one of the least interesting superheroes. "Ant-Man" has all the polished special effects, sets and costumes you would expect in the umpteenth superhero blockbuster -- but it's funnier and has more heart than the typical Marvel tent pole. It's better than many that have come down the studio chute in the last few years.

Gotta be worst of the Marvel's superhero flicks I've watched so far. Fails to rise above mediocrity, thanks to the shabby execution, poor dialogues as well as their delivery and dull performances. Not particularly interested in special effects & action sequences, so I'd refrain from commenting on that aspect.