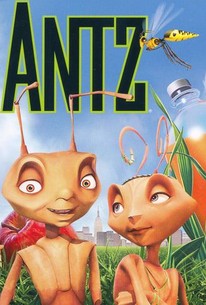 Central Park ant drone Z longs to be an individual of accomplishment, but Z's colony is a society that puts the value of the colony over personal achievement. Young Z sets his sites on the colony's Queen daughter Bala- who is uninterested until Z successfully mounts a revolution within the colony for the advancement of individuality.

Kids may be puzzled by rebellious worker ants chanting Marxist slogans, but their parental guides may welcome the relief from the prevailing blandness of family films.

Visually striking and dynamically shot, this has strong characters and no shortage of incident.

The filmmakers seem to have deliberately snubbed the traditional audience for animated features.

It's a perfect picnic, without the pesky human interference.

Hilarious stuff, superbly achieving that elusive goal of being entertaining kids fare and having a lot to offer the adults.

[Antz is] a bizarre, tonally dissonant mess of a movie. Apparently we were willing to overlook such issues 22 years ago.

In a world of cookie-cutter movies at least it tries a bunch of weird stuff.

Amid all the ingenuity and smartness, the work fails to move and contains little wonderment - ironically appropriating the zealous industry of its on-screen ants.

A Engaging and awe-inspiring animation once again elevates Shrek's world to fantastic heights, and the laughs are just as freewheeling as we have come to expect.

By any standard, the film is a remarkable technical achievement.

The best thing about watching this entertaining film is seeing Woody Allen's fingerprints all over it, mainly in the protagonist's insecurities and neurosis, even though the animation doesn't seem really fluid or natural when it comes to its wooden-faced, stiff-looking characters.

Brilliant animated feature, Antz is a fun, entertaining picture that is a must watch for viewers of all ages. What makes the film work so well is the varied cast of talented voice actors who bring great characters alive, and it is elevated with a great story and stunning animation. I heavily enjoyed the film, and though it was a worthy film to watch, And what's great about the film, is that it wasn't made by Pixar, and it just goes to show that other studios have managed to get animated magic as well with their features. Antz is a well made feature, a film that looks stunning, and is fun to look at and enjoy. The story is engaging as well, and the cast, like I stated is wonderful, and they each bring some terrific voice acting to the roles they portray, and it's what makes the film really stand out among other animated features. If you're a genre fan, you'll surely love this one. The film may not be a Pixar feature, but it nonetheless succeeds at capturing the viewer's attention due to a fine story, terrific animation and enough humor to appeal to viewers of all ages or anyone looking for a fine animated comedy. Antz works well on many levels, it's a film that manages to succeed on nearly every level and with its cast of voice actors, and they manage to give much more depth to the film, as well as having an entertaining and humorous visual sense that make Antz a film that is well worth your time, and it is a film that ranks among the finest computer animated features ever made. If you're a fan of animated films, give Antz a shot, it's a visually striking feature with terrific storytelling, and effective voice performances to really make this an enjoyable and highly memorable feature.

Many adult themes are presented in this film; that's what makes it great. The story itself is a good and keeps the audience engaged. This isn't your typical animated film. It's dark, violent, and at times even depressing. It's more deep and not very childish, but that is what makes it stand out.

Such a metaphorical film for many issues. Woody Allen was a great choice for the main character here, a great film to teach the kids about individuality.