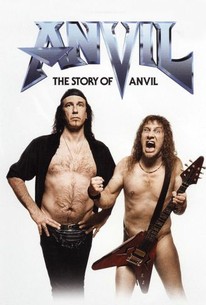 Critics Consensus: A touching, uplifting and inspirational rockumentary about an aging metal band, both hilarious and heart-warming in equal measure.

Critics Consensus: A touching, uplifting and inspirational rockumentary about an aging metal band, both hilarious and heart-warming in equal measure.

Critic Consensus: A touching, uplifting and inspirational rockumentary about an aging metal band, both hilarious and heart-warming in equal measure.

Anvil! The Story of Anvil Photos

About the Canadian metal band Anvil. At 14, Toronto school friends Steve "Lips" Kudlow and Robb Reiner made a pact to rock together forever. Their band, Anvil, went on to become the "demigods of Canadian metal," releasing one of the heaviest albums in metal history, 1982's "Metal on Metal." It went on to sell millions of records, but Anvil's career didn't flourish afterwards. Instead, they went straight to obscurity.

News & Interviews for Anvil! The Story of Anvil

View All Anvil! The Story of Anvil News

Critic Reviews for Anvil! The Story of Anvil

While it's undoubtedly comical and touching, a pall of middle-aged gloom hovers over the antics of Canada's longest surviving death metal band.

The music, heard in economical proportions, is secondary to the unexpectedly deep bond between its creators. Their story is an underdog's triumph that's difficult to deny.

This Is Spinal Tap was a mockumentary, but this is for real, a portrait of a band that was very influential on later metal bands, like Metallica, but who found the big time elusive.

Anvil! The Story of Anvil is overflowing with honesty. It is fair to say that it is to metal what The Wrestler is to wrestling. It is brutal but, in a way, triumphant.

A winning and surprisingly moving documentary about -- wait for it -- a struggling Canadian heavy metal band that apparently influenced a generation of hard-rockers including Metallica, Anthrax and Guns N' Roses.

Indeed, the movie turns out to be as much about teenage dreams and middle-aged male friendship as it is about music, which means, fortunately, that you don't have to be a metalhead to enjoy it.

Anvil! The Story of Anvil is funny, poignant, tender and remarkably affirming of spending one's life chasing a dream.

You can say what you want about Anvil, but they are still here, still rocking out, and because of that they are a success.

A great exploration of talent and the consequences of time. [Full review in Spanish].

Robb and Lips are so wonderfully, unabashedly human and real that you can't help but identify with them.

Audience Reviews for Anvil! The Story of Anvil

This band's story is a hopeful and endearing rock fable that touches the heart of many, even non metal fans like myself. Robb and Lips are two dedicated artists who never had the recognition they deserved.

A lot of the metal bands that started in the early 1980s are still relevant today, some are even more popular than ever. This is the true story of one band that started out with them but never made it anywhere. The documentary follows the two founding members Lips and Robb, from their day jobs to a catastrophic European tour, from new hope with another record to the search for a label. That's as disenchanting as it is charming and funny. The two musicians never gave up on their dream and still refuse to do so. To see them try and fail over and over is both embarrassing and touching at the same time. This would not be a great underdog story if it wasn't for the ray of hope in the final act. Every viewer of this film will certainly check wikipedia afterwards to find out where their road took them recently. And it'll leave a smile on their face.

You don't need to love metal, you just need to love honest artists. In the early going, you can't help but compare it to This Is Spinal Tap, and start to wonder how much of it is put on, but you quickly realize that this story is too common and too pure to be faked. There are hundreds of bands out there who almost made it... and next to none of them can say they've been together 30 years, like Anvil has. When Anvil was unable to follow up their shot - the final slot on a tour of Japan that also featured Scorpions and Bon Jovi - they wound up doing everything themselves. The Story of Anvil is a touching documentary that can bring you to tears in some places - Lips and Robb never quite lose that fanboy joy, no matter how badly things go, or which members of which big bands don't remember them - and it can make you laug out loud in others. Typical line: "The tour went wrong. Everything went disastrously wrong. But at least there was a tour for things to go wrong on. I don't regret a minute of it." Talk about an optimist! At its core, this film is about two regular guys who just love what they do, and who keep doing it, for themselves and for each other. As every struggling artist knows, you have to imagine that Sisyphus is happy. Excellent documentary, a wonderful surprise.

"At fourteen, they made a pact to rock together forever. They meant it." At 14, best friends Robb Reiner and Lips made a pact to rock together forever. Their band, Anvil, hailed as the "demi-gods of Canadian metal, " influenced a musical generation that includes Metallica, Slayer, and Anthrax, despite never hitting the big time. Following a calamitous European tour, Lips and Robb, now in their fifties, set off to record their 13th album in one last attempt to fulfill their boyhood dreams.

REVIEW
"Anvil! The Story of Anvil" is a rock documentary that focuses on an extremely influential, yet now totally obscure, Canadian speed trash metal band. That's the story of Steve "Lips" Kudlow who teamed up with his high school buddy Robb Reiner in 1973. By the early 1980s they recorded their seminal album "Metal on Metal" and toured along with Scorpions, Whitesnake and Bon Jovi in Japan. They were to become famous like their peers, yet something didn't work out as Lemmy of Motorhead aptly put it: "sometimes, you have to be in the right place at the right time". 25 years later the two band members live like ordinary people providing for their families through hard work. Director Sacha Gervasi is a long-time fan of the band who has crafted a motion picture that goes from funny (the archival footage of the band) to realistically sincere and poignant (the band's constant struggle with elements out of their control). The movie rings true throughout depicting the band dealing with numerous challenging situations which include: the organizational problems on their European tour, the discord between Kudlow and Reiner while recording their 13th album and the lack of the proper record label which would release their CD. At this point, the movie gets far more universal as it deals with the situation of numerous under-appreciated outfits in the cruel music business. Gervasi never lets things go too dark though retaining the joyous, almost celebral tone of the movie. In a nutshell, "Anvil!" is about never giving up one's dreams no matter what. Gervasi's love letter to the band is surprisingly tender, yet far from glorifying.

Anvil! The Story of Anvil Quotes