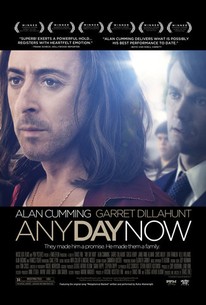 Inspired by a true story and touching on legal and social issues that are more relevant now than ever, ANY DAY NOW tells a story of love, acceptance, and creating your own family. In the late 1970s, when Marco (Isaac Leyva), a teenager with down syndrome who's been abandoned by his mother, is taken in by committed couple Rudy (Alan Cumming) and Paul (Garret Dillahunt), he finds in them the family he's never had. However, when their unconventional living arrangement is discovered by the authorities, Rudy and Paul must fight a biased legal system to adopt the child they have come to love as their own. (c) Music Box Films

News & Interviews for Any Day Now

View All Any Day Now News

Critic Reviews for Any Day Now

The film's heart is in the right place but it never rises above the level of a polemical melodrama.

Young Leyva has a smile that lights up the screen, but the film makes the mistake of depicting several of the characters as though they were villains from some lesser movie. That the film overcomes this approach is testament to its essential spirit.

Any Day Now is a movie of good intentions and bad wigs, warm-hearted but slightly oversimplified.

Travis Fine's true-life story from the 1970s is as ruthless a tear-jerker as we have seen in many a year.

The film fights its small fight honestly and with commendable integrity.

Redeeming Fine's film from telemovie obviousness is the same thing that surely motivated it: what the actors, all three of them, make of their roles.

...as slight as the story is, Any Day Now proves that Matt Jay knows how to set a mood and it's one that should resonate with anyone who's ever felt uneasy in a new place.

Through a number of fortunate coincidences actor and writer Travis Fine got his hands on a screenplay called Any Day Now which was written in 1980 by George Arthur Bloom, who was inspired by true events to write this script.

Any Day Now explores institutionalised homophobia creatively and intelligently, engaging its audience on a number of levels, and offers a potent warning against discrimination of all kinds.

Any Day Now has its moments and some terrific acting, but it's also a new movie that feels as though it had been made thirty years ago, back when people wanted to talk about social injustice, but were a lot less articulate on the subject.

A movie that embraces melodrama and is elevated by its willingness to do that.

As a weepy and capitalised Important Tale, the film is very good and some moments stir up emotion, but it isn't the film it should be, failing to hit the heights it is so earnestly aiming for.

Audience Reviews for Any Day Now

I liked this movie mostly due to Alan Cumming and Garret Dillahunt's excellent performances as this couple who try to, unfortunately, no success to adopt a child, with down syndrome, that nobody else wants except them. Of course as everyone finds out the true nature of Rudy and Paul's relationship, it leads to a legal battle with a system that is already against them just for who they're sleeping with and aren't actually looking at the needs of a child that has thrived with them. Instead they just want to destroy the lives of two good men and the love they have for this child that truly needs it. Obviously the movie is very relevant today, probably more so than at any other time in the history of gay rights. While I think the movie is very good, thanks to the leads, especially Alan Cumming, who is absolutely fabulous here, I think the story is probably too sentimental for its own good. I think it's more concerned with trying to make you cry rather than telling an effective story of how the system simply, and pardon the pun, screwed these two over when Marco's best chance at having a happy and normal life was with these two men. I don't want to shit on the relevance, or importance of this story, because it IS a good story, but it handles its subject matter with kid gloves. I hate injustices as much as the next guy. The system we have is put into place to serve those who need it, whether they be gay, black, white, asian, hispanic, muslim, russian, or whether they have a mental disability. The system is made for justice, and no justice was served here because the two men involved slept with each other. So I think it is an important story to tell, but I think it could've been done better and more effectively than it was here, where it goes STRAIGHT for the heartstrings from beginning to end. Again, I thought it was a good story, but perhaps a bit of a missed opportunity to do something really special. Thankfully Alan Cumming and Garret Dillahunt are simply outstanding here. Alan Cumming much more than Garret. That's not taking anything away from Garret, it's just stating how good Alan was. If there's any reason, at all, to watch this movie it would be for those two. They make it work and they take sentimental script and turn it into a really good movie. I also had a problem with the ending, it's pretty tragic. If you've seen a minimum of 25 movies in your lifetime, it's easy to figure out what happens in the end. While it does help to prove a point, it feels a little exploitative to me. I was trying to come up with a metaphor with a knife being slowly pushed into your heart as you're watching the movie. Anyway my point is that if you thought the movie was sad BEFORE the ending, after it...that's a whole 'nother story. Anyway, this is a good movie elevated by the fantastic performances from the leads.

Beautifully acted story of a time of painful bigotry, love and what it means to be a family. Highly recommended.