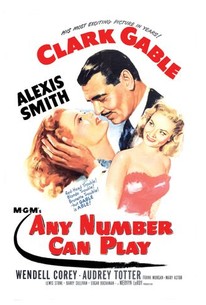 Any Number Can Play Photos

In this light drama, Clark Gable once again played his stock-in-trade role of a rogue with a heart of gold. Charlie King (Gable) runs a casino, but, in a business that thrives among the unscrupulous, Charlie takes pride in running an honest game and treating his customers with fairness and respect. However, Charlie's wife Lon (Alexis Smith) doesn't care if he runs a fair game -- she regards gambling as a dirty and corrupt business, and no matter how honest Charlie may be, he's still involved in a wicked activity. Charlie's son Paul (Darryl Hickman) is also against him; when Paul gets in trouble and Charlie bails him out of jail, he refuses to leave with him, instead going home with mother. Charlie invites Paul to see what his casino is like, and Lon agrees that Paul should know just what his father does.

Critic Reviews for Any Number Can Play

In attempting to sketch a portrait of a bigtime casino operator, screenwriter Richard Brooks has jammed the yarn with too many subordinate characterizations which fly off at a tangent.

Everything gets jumbled in a mishmashy script that never knows where it's going.

A competently acted and interesting entertainment but no great revelation.

[I] still cannot understand why this is supposed to be a Metro feature film.

Clark Gable could have played in his sleep his part in this verbose Mervyn LeRoy's family melodrama, set almost entirely within a casino.

Stilted and unrealistic, this Gable vehicle is still arresting because of LeRoy's terse, professional direction and the star's commanding performance, although Corey and Smith give anemic efforts.

Audience Reviews for Any Number Can Play

One of the King's indifferent postwar vehicles isn't terrible but nothing special at least he has a strong leading lady in Alexis Smith.

Any Number Can Play Quotes