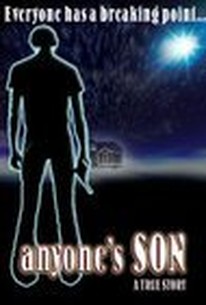 It was Thanksgiving Weekend, 1976, in the quiet suburban town of Montvale, New Jersey; high school football and quiet, reflective dinner gatherings for many families. But by the end of this holiday weekend, life in this small community would be shattered forever. Based on actual events, the film 'Anyone's Son' tells the story of a young man named Harry De La Roche, who murdered four of his family members in cold blood while they slept. Nearby residents were stunned when news spread of this traumatic event, and were further shocked during the trial that would follow nearly a year later. This film will not only explore the events that took place leading up to the grizzly killings, but also will examine the context in which they took place, and the community they took place in. Even though this is a film based on actual events from nearly 30 years ago, the themes of gun control, family values, and peer responsibility, ring true for any era, including today. On the outside, the De La Roche family seemed normal and happy. Yet, as we examine things closer, things were anything but normal and happy. This film will also focus on the subsequent trial, in which young Harry was charged, and eventually convicted, on four counts of murder. What is it that led Harry to reach a level so unconscionable that he would murder his own family? The poor family life, the endless tormenting by his peers, and an absolute loss of self-identity were certainly major factors in Harry De La Roche turning from 'Anyone's Son' into a cold blooded killer.

There are no critic reviews yet for Anyone's Son. Keep checking Rotten Tomatoes for updates!

There are no featured reviews for Anyone's Son at this time.