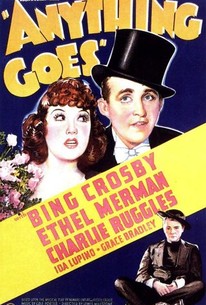 Anything Goes is a fun-filled but hardly faithful adaptation of the same-named Cole Porter Broadway musical, with additional songs by Hoagy Carmichael, among many many others. Set on a luxury liner, the story gets under way when Moonface Mullins (Charlie Ruggles), Public Enemy No. 13, slips on board disguised as a bishop. As he weaves in and out of the story, Billy Crocker (Bing Crosby) romances Hope Harcourt (Ida Lupino), titled Englishman Evelyn Oakleigh (Arthur Treacher) also pursues Hope, and brassy entertainer Reno Sweeney (Ethel Merman) chases after Sir Evelyn. Critics in 1934 complained that the original Broadway production's Victor Moore was replaced by Charlie Ruggles, but none could fault Ethel Merman's rendition of "I Get a Kick Out of You", nor her duet with Bing Crosby, "You're the Top" (the only two songs retained from the Porter score!) Anything Goes was remade in 1956, again with Bing Crosby, and again with little fidelity to the original (this remake required MCA Television to retitle the 1936 version as Tops is the Limit).

Critic Reviews for Anything Goes

It gets by, but without distinction.

There are many features in which the stage production was better. However, a picture must be judged as though one had never seen the stage version and, in all fairness, this Is a pleasant film.

It is rapid, hilarious, and competently directed by Lewis Milestone, whose penchant for playing with trick camera angles probably produces more results with less cost in a musical than in any other form of cinematography.

Ethel Merman comes from the original cast and her job in the picture equals her job in the stage version, which means aces. But Charlie Ruggles as the gag gangster is miscast.

It's amusing entertainment if you don't mind the crazy confusion.

Taken item by item, here is the material for a smashing musical. Taken in the mass, the film lacks that final voltage which jerks pleasant entertainment into the records class.

Not so uproariously funny as it was on the stage, the celluloid edition of Anything Goes still is exceedingly diverting.

Anything Goes is primarily a picture starring Bing Crosby with important featured roles assigned to Ethel Merman and Charlie Ruggles, but Ida [Lupino] walks off with the cream of the picture.

Sophisticated merriment with speedy gags and catchy tunes and several of the dirtiest cracks that have slid through the Hays office since the church turned censor.

Directed somewhat ploddingly by Lewis Milestone, better known as the architect of serious films... [Porter's] wonderful score is retained, and Lupino, still in her teens, acquits herself marvelously.

Audience Reviews for Anything Goes

Charming musical with an incredible cast. Everybody's good but Charlie Ruggles stands out.