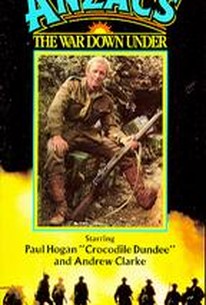 Anzacs: The War Down Under is a two-part Australian TV movie dramatizing the activities of the Australian and New Zealand Army Corps (ANZAC). This all-volunteer outfit fought shoulder to shoulder with enlisted men during the First World War. The film concentrates on three Anzacs: An aristocrat (Andrew Clarke), his best friend (Mark Hembrow) and his friend's sister (Megan Williams). Part One details the training of the volunteers, and their first taste of true combat. Part Two details the further activities of the all-volunteer Australian and New Zealand Army Corps (ANZACS). During the first few months of World War I, aristocratic Anzac Andrew Clarke is wounded, and is urged to go home to convalesce by Megan Williams, the sister of his best friend (Mark Hembrow). Meanwhile, heavy fighting in France has thinned the ranks and battered the morale of the other Anzacs. Featured in the cast as a military man is Paul Hogan. It was Hogan's new-found international stardom in 1986's Crocodile Dundee which sparked the American distribution of Anzacs, two years after its initial 1985 Australian run. The video release is edited from the 10-hour Australian miniseries. ~ Hal Erickson, Rovi

Andrew B. Clark
as Martin Barrington

Critic Reviews for Anzacs - The War Down Under

There are no critic reviews yet for Anzacs - The War Down Under. Keep checking Rotten Tomatoes for updates!

Audience Reviews for Anzacs - The War Down Under

There are no featured audience reviews yet. Click the link below to see what others say about Anzacs - The War Down Under!

Anzacs - The War Down Under Quotes