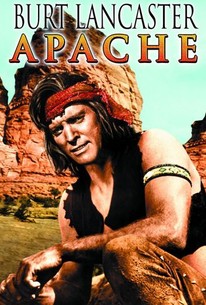 Apache was based on Paul I. Wellman's novel Broncho Apache, which in turn was inspired by a true story. Burt Lancaster plays Massai, a lieutenant of the great Apache warrior Geronimo (here depicted as an old man, played by Monte Blue). Though his tribe has signed surrender terms with the conquering whites, Massai refuses to do so. He escapes from a prison train and conducts a one-man war against the white intruders-and against some of his own people. Along the way, he claims Nalinle (Jean Peters), whom he previously regarded as a traitor to his cause, as his wife. John McIntire plays famed Indian scout Al Sieber, who-in this film, if not in real life-is sympathetic to the Indians' plight and Massai's single-purposed cause. The real-life counterpart to Massai was killed by Sieber's minions after agreeing to call off the hostilies; United Artists objected to this, forcing producer/star Burt Lancaster to shoot an unconvincingly happy ending.

Charles Buchinsky
as Hondo
View All

Massai covers a lot of ground in his crusade (via plains and trains), and so does the movie -- perhaps too much, since there are some abrupt shifts in both message and characterization.

Don't be misled by the commonplace title - this is one of the most exciting and entertaining westerns Hollywood has produced in a cayuse age.

Burt Lancaster joins a long line of white actors who played native Americans in this brutal Western, directed by the young Robert Aldrich, who was forced to change the ending.

... not a total success, but overcomes its leaden storytelling by being muscular and accepting of the Apache culture without being patronizing.

This is a horrible western. First of all, are we really supposed to believe that Lancaster is a Native American? It's too obvious he's not. Second, the story is wandering. Lastly, don't waste your time.

Great film. Well acted despite the cheesy 'blacking up'. Typical western in every other respect.

Enjoyable western that takes the "native american" side by pointing out the terrible racism perpetrated by white people. By blacking up white actors and having them say "white man speak with forked tongue". Sigh. At least Burt's heart was in the right place...