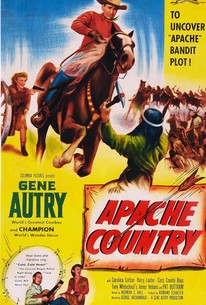 The "B"-western field of the 1950s was laid low by increasing budgets and decreasing box-office appeal. Gene Autry's series for Columbia was still turning a profit in 1952, but films like Apache Country were a lot stingier-looking than his earlier efforts. Autry plays a government agent who rides into Indian territory to find out who's been selling guns and liquor to the Apaches. Hoping to keep his identity a secret, Autry is betrayed by a "mole" for the crooks, and gunplay ensues. TV and radio soap-opera veteran Mary Scott does an adequate job as the heroine, while movie veteran Francis X. Bushman brings his usual polished professionalism to a disturbingly minor role. And, oh yes, Gene Autry and his traditional cohorts Pat Buttram and Carolina Cotton do a lot of singing.

Pat Buttram
as Himself

There are no critic reviews yet for Apache Country. Keep checking Rotten Tomatoes for updates!

There are no featured audience reviews yet. Click the link below to see what others say about Apache Country!