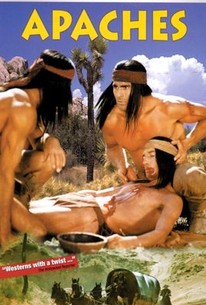 Gottfried Kolditz's 1973 Apachen constitutes an East German Western, influenced by (and made in the mold of) classic American cinematic forays into the Old West, such as the works of Howard Hawks and John Ford. The picture covers some of the same territory as Robert Aldrich in his 1972 Ulzana's Raid. It begins with the mass slaughter of a group of Apaches at the dawn of the Mexican American War, and then follows Apache chief Ulzana as he rallies his fellow warriors, hell-bent on bloodthirsty revenge. Gojko Mitic, Willi Schrade, Colea Rautu, Gerry Wolff, Fred Delmare, Leon Niemczyk, and Rolf Hoppe co-star. Kolditz followed it up with a sequel, the 1974 Ulzana.

The fun I had was largely a matter of gauging what the filmmakers had, in the course of earnest imitation, gotten wrong.

There are no featured reviews for Apachen at this time.