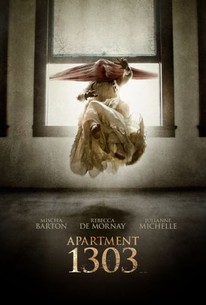 Having grown up under the controlling grip of her fame-hungry mother (Rebecca De Mornay), Janet Slate (Julianne Michelle) jumps at the opportunity to move into what looks to be a great high-rise apartment in downtown Detroit. Yet some deals are too good to be true as one night her boyfriend Mark (Corey Sevier) finds her in the middle of the street - having fallen from the balcony thirteen stories above. When her sister Lara (Mischa Barton) tries to investigate the mystery of what happened, she moves into the same apartment and encounters the odd neighbors in the building, including an eerie nine-year old girl who seems to somehow know the real reason for Janet's fall. Lara soon realizes that her sister's death might spell the same fate for her unless she can overcome the strange events that are terrorizing the inhabitants in Apartment 1303. (c) Gravitas Ventures

Your monthly rent is probably scarier than what writer-director Michael Taverna has cooked up in this inept and derivative tale ...

The movie references and cliches pile up, but aside from a truly chilling final shot, this one is barely in 1D, much less 3.

Teeming with inconsistencies and ineptitude, Apartment 1303 ends up a complete waste of time, not even amusing as bottom shelf schlock that welcomes the respite of mockery.

Describing this film as horrendous is a compliment.....

This movie is truly awful, exceptionally bad acting, directionless and fails to even make you blink little lone jump, likely to die of boredem rather than scared to death!