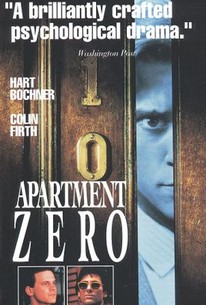 Set in post-Junta Argentina, Apartment Zero uses the story of a gay romance to ponder whether or not the overthrow of the military government had really changed anything. Preferring to be an "outsider", Argentinian Colin Firth pretends to be British. Firth escapes from reality by holing up in the movie theatre that he owns. His life is turned around by his new roommate Hart Bochner, who seems to be the living embodiment of Firth's film icons James Dean and Montgomery Clift. Firth's apolitical attitudes--and his sexual attraction to his new roommate--are tested to the breaking point when it becomes apparent that Bochner is in the employ of the government, arranging the "disappearances" of political dissidents. Given the number of films that have been expanded to "director's cut" length on videocassette, Apartment Zero is a rarity: it was shortened by director Martin Donovan for the video version.

Debora Bianco
as Girl in Cafe

Federico D'Elía
as Boy in Cafe

Veronica Gambini
as Girl with Carlos in Building

Nicolas Pereyra
as Doctor at Instititution

Rosario Varela
as Girl with Carlos at Tango

Oca Spirito
as Woman in Cinema #1

Micky Chapman
as Woman in Cinema #2

Jorge Caseres
as Young Man with Vanessa
View All

[This] film, a dazzling mix of mirth and menace, is that rare find: a thriller that plumbs the violence of the mind.

This overwrought and underdeveloped psychological thriller with heavy-handed political implications adds up to exactly nothing.

Colin Firth is a first-rate young actor and Hart Brocher has the sex appeal to suggest magnetic nastiness, but the deeper they sink into this cesspit, the less you care.

It's that grab for political significance that does Apartment Zero in -- that turns what might have been a modestly successful psychological thriller into a messily failed art film.

The film's intriguing perversity compensates for the excesses of its plot and presentation.

Not without humor, Apartment Zero is a titillating foray into the dangerous, the unexpected and the macabre.

Here's an offbeat thriller that never quite realizes its potential.

Stylish and intriguing mystery tale made on a low budget

It remains intriguing even when it sort of derails in the final reel.

In "Apartment Zero," Adrian LeDuc(Colin Firth) runs a moribund repertory cinema club in Buenos Aires but turns down his friend Claudia's(Francesca d'Aloja) offers to rent out his theatre for political meetings, preferring, in his words, to keep the blood off the walls and on the screen. With his mother(Elvia Andreoli) requiring constant medical care, he puts an ad in the newspaper for a roommate. After a few applicants that do not meet his high standards, Jack(Hart Bochner), a hunky American, shows up to rent the room, with Adrian even making him breakfast. Early on in "Apartment Zero," Adrian admonishes people who watch films on video, saying they prefer to skip through the slow parts. Later on, I was thinking again of that statement, wondering if Adrian could possibly be commenting on the film he is in, as it suffers from a particularly crawling pace, even with its psychosexual themes on full display. Just as the movie finally kicks into gear when it takes a turn towards the baroque in its last act, it also takes an extremely roundabout way to also take full advantage of its intriguing post-junta milieu. A situation Adrian ignores because he has had his head in the sand, apparently due to his love of movies.(He even acts more English than Argentinian.) In any case, Colin Firth is superb, years before he would cause half of England to have a spontaneous orgasm.

An intriguing, intense psychological thriller with sexual overtones set in Buenos Aires, about a lonely cinema owner Adrian LeDuc, played by Colin Firth in a sensational, multi-layed performance, who's life is changed when circumstances forced him to rent his insane mother's room who is the hospital, to a mysterious, handsome stranger named Jack Carney, played by Hart Bochner in a compelling performance. Adrian is obsessively attracted to Jack, and the two form a bizarre relationship, that has an unspoken sexual longing. This connection becomes troubled when reports of bodies in the streets begin, and Adrian starts to believe that Jack is hiding a horrific secret, that he may be the mass murderer that has been terrorizing the city. Extremely well acted by the entire cast, brilliantly directed and scripted by Martin Donovan. A dramatically charged film with Hitchcockian elements that give it suspense and its wicked black humor. Highly Recommended.

odd but with excellent performances by two fine actors.

This is a neat little flick that you'd be hard-pressed to find anywhere else but Flixster. A big treat for Colin Firth fans, where he plays his usual affected, stuffy British self until a delightful little turn in the last half hour or so. The plot is original and inventive, though it gets sidetracked way too easily worrying about a bunch of side characters who ultimately end up being unimportant. When the main storyline is actually resolved, you realize that very little has actually happened throughout the movie. Further, that main storyline can be poorly explained sometimes. I didn't really understand the whole army subplot at all, or even why the killer was acting as he did. I don't know if it was the director's intent or not, but it was confusing. Apartment Zero does do a lot of things right, though, including a strong tone, awesome settings and some very good performances - not to mention the ridiculous sexual tension. This movie is the biggest tease ever, seriously.