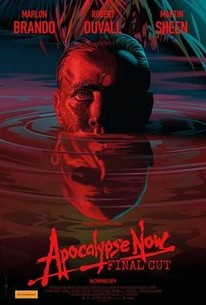 Restored from the original negative for the first time ever, Apocalypse Now Final Cut is Coppola's most realized version of the film, which was nominated for eight Academy Awards (R), won three Golden Globes (R) (Best Original Score, Best Director, and Best Supporting Actor - Motion Picture, 1980), and is one of AFI's top 100 films. Coppola's visually dazzling masterpiece is a surreal, hallucinatory, epic tragedy about the horror of the Vietnam War. A U.S. Army Intelligence officer is sent on a bizarre river journey deep into the jungle to assassinate Colonel Kurtz, a renegade Green Beret who uses primitive tribesmen to wage his own war.

Dennis Hopper
as Photojournalist
View All

That it can never be a perfect film does not make is any less of a great one. It is amazing that as specific as it is to the insanity of the war in Vietnam, it speaks just as much to deeper, permanent American insanity...

Neurotically, Coppola continues to toy with it, getting further away from his original impulses each year.

Apocalypse Now finds its triumph in restating the inhumanity of empire.

...one of the pleasures, therefore, of Apocalypse Now: Final Cut, released to mark the 40th anniversary of the film, is the freedom to spend more time with moments that, on first viewing, may have slipped by in anticipation of what was to come.

A must-see theatrical experience, but the first cut remains the one worth preserving.

The trials and tribulations of war have never looked so piercing and atmospheric... this new release of an old favourite is simply a must-have.

Looks better than ever before

not really a war film at all

A kind of middle ground between commercial constraints and creative indulgence.

The first cut was the deepest.

Timeless in every way.

Apocalypse Now: Final Cut is a graphic yet gorgeous masterpiece about the Vietnam War. It's also perhaps the best movie ever made about the horrors of war.

Asher Luberto
We Got This Covered
View All Critic Reviews (21)

There are no featured reviews for Apocalypse Now: Final Cut at this time.