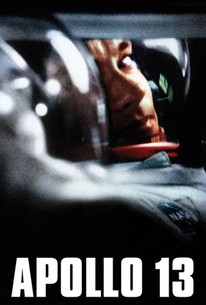 Critics Consensus: In recreating the troubled space mission, Apollo 13 pulls no punches: it's a masterfully told drama from director Ron Howard, bolstered by an ensemble of solid performances.

Critics Consensus: In recreating the troubled space mission, Apollo 13 pulls no punches: it's a masterfully told drama from director Ron Howard, bolstered by an ensemble of solid performances.

Critic Consensus: In recreating the troubled space mission, Apollo 13 pulls no punches: it's a masterfully told drama from director Ron Howard, bolstered by an ensemble of solid performances.

"Houston, we have a problem." Those words were immortalized during the tense days of the Apollo 13 lunar mission crisis in 1970, events recreated in this epic historical drama from Ron Howard. Astronaut Jim Lovell (Tom Hanks) leads command module pilot Jack Swigert (Kevin Bacon) and lunar module driver Fred Haise (Bill Paxton) on what is slated as NASA's third lunar landing mission. All goes smoothly until the craft is halfway through its mission, when an exploding oxygen tank threatens the crew's oxygen and power supplies. As the courageous astronauts face the dilemma of either suffocating or freezing to death, Mattingly and Mission Control leader Gene Kranz (Ed Harris) struggle to find a way to bring the crew back home, all the while knowing that the spacemen face probable death once the battered ship reenters the Earth's atmosphere. The film received an overwhelmingly enthusiastic critical response and a Best Picture nomination, but lost that Oscar to another (very different) historical epic, Mel Gibson's Braveheart. In 2002, the movie was released in IMAX theaters as Apollo 13: The IMAX Experience, with a pared-down running time of 116 minutes in order to meet the technical requirements of the large-screen format. ~ Don Kaye, Rovi

Larry B. Williams
as Buzz Aldrin

The Moon in the Movies: 10 Giant Leaps From the Silent Era to First Man
Rank Tom Hanks’ 10 Best Movies
All 42 Fresh Movies and Originals Coming to Netflix in January

Apollo 13 captures the wonder of space travel with the wide-eyed zeal of a 10-year-old: They really were heroes, these guys, and the movie shows you why.

APOLLO 13 is...A-OK. In an era when cinematic heroics seem to be defined by bullets and brawn, it is a pleasure to see a movie in which the good guys triumph by using their brains!!!

Tom Hanks is on his way to becoming the American Everyman, an exemplar of boyish goodwill and quiet moral force.

Ron Howard's pop-entertainment you-are-there space thriller is easily the most rousing film of the year. And it might make real spaceflight just as nifty as Star Wars for youngsters.

Even if you know how it all turned out (and you should), this amazing journey is harrowing and exhilarating.

The film succeeds brilliantly at organizing great gobs of information into powerful drama.

[A] compelling look back at the most action-packed American space mission of all time.

Dust off your DVD/Blu-ray or stream Apollo 13 to watch a master craftsman, his players, and crew coalesce to provide one helluva of a ride.

This film is a tribute to the all-American values of tenacity, teamwork, ingenuity, and--as is the case for all teams on dangerous missions--selflessness and brotherhood.

Five days summarized in two hours and twenty of pure spectacle that rises, by own merit, as one of the best productions that Ron Howard has signed throughout his career. [Full Review in Spanish]

James Horner's score is so good.

They got everything right with this one. Ron Howard's masterpiece.

This is the bast space-themed movie ever. I had no idea of the true-life drama that went on during the space program but director Ron Howard presents it perfectly. Strong performances by Hanks and Sinise. Ed Harris is pich perfect.

To make a compelling and enthralling film about an event the outcome of which is pretty well known is not exactly easy. It does help, of course, if you can rely on names like Hanks, Sinise, Harris or Bacon. In the end, it only works if everyone involved delivers their best. This is one of those cases. Director Ron Howard knows exactly which buttons to push to get a reaction from the audience. And so we are sitting there, on the edge of our seats, even though we know A13 made it home in one piece against all odds. It's just so incredibly well done from the script, acting, music, camera work to the great Zero G special effects. An outstanding history lesson and perfect entertainment.