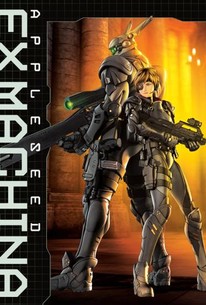 Veteran action filmmaker John Woo produces this sequel to the 2004 film Appleseed. Partners both at home and on the battlefield, Deunan, a young but skillful warrior, and Briareos, an experienced cyborg soldier, protect the utopian city of Olympus, where the last of humanity dwells in peace following a war that's killed off the rest of the world's population. As members of the elite police squad E.S.W.A.T., they take their orders from Gaia, an artificial intelligence that governs the city through the use of biologically engineered humanoids called Bioroids. Trouble stirs when Gaia engineers a new member for E.S.W.A.T. based on Briareos' DNA. The new team member, Tereus, looks and acts eerily like the old Briaros, before so much of his body was replaced with robotics following the war. Even more disconcerting, Tereus seems to have the same feelings as Briareos for Deunan!

If you liked the first film I'd be really surprised if you didn't like Äppleseed: Ex Machina". Yet while it rectifies a couple of errors from the previous film it unfortunately introduces some new ones.

Amidst all this sequel's state-of-the-art 3D visuals and technological obsessions is a quest for the human beyond (or at least within) the machine.

Uses 3D computer graphics to replicate a 2D animated look and feel - whatever will they think of next?

When you're done oohing and aahing at the animation, it's still as tedious, empty, and boring as the first film...

While seen as a continuation of its predecessor, it is possible to view this installment without having seen the first. The story is more or less standalone, but the buildup for the existing characters and futuristic setting is nearly non existent in this one. This is where Appleseed comes in to play.

The 1 hour 40+ minutes is an appropriate time as this film delivers everything it needs to. The story is interesting and heavy on the science fiction, while the the Japanese voice work is a positive.

The action seen throughout the picture has John Woo's signature all over it. Guns are a blazing and bullet casings are dropping all over the place. It is definitely fun to watch.

Visually this film gets high praise. Japanese animation already looks good, but turn it into CG, render it to look like cel shading, and it all dazzles the eyes.

Overall, Appleseed: Ex Machina has little in the way of disappointments and is a compliment to the Japanese animation genre.

The Appleseed saga continues as Deunan and cyborg sidekick Briareos are joined by a bioroid created from his genetic template and fight to prevent an evil scientist from taking control of the entire population with an insidious communications device. The first Appleseed film was a visual feast that perfectly captured the essence of the Manga it was based upon. The story here is rather predictable and derivative, involving the usual stereotypical mad scientist having megalomaniacal designs on the human race, but it was never really the plot that the original was all about. This sequel obviously concentrated on upgrading the visuals, and they are a lot slicker and more up to date than the originals; but that does not necessarily mean that they are "better". Everything has a glossy sheen on it that lacks the gritty, dark style that made it so good, and they manage to make it look more like a cut scene from a Final Fantasy game rather than less. The action sequences are far less intense and exciting as a result, and the simplistic characterisation means there is little in the way of emotional involvement. There's still some gorgeous images and fantastic manga-style production design, but as a whole it's another case of a franchise becoming a glossy shadow of its former self.

I prefer the story of Ex Machina to the 2004 Appleseed, but it does require you to have prior knowledge of the characters in order to enjoy and feel the emotional components of the story (which drive it more than mere plot incidents). You will still get the visual stun, but I don't know how well a new viewer can cope with the character details in Ex Machina as I saw both versions of the first Appleseed and was one of the anxious awaities when Ex Machina came out. I was not at all disappointed. This is visually astonishing and the character development runs VERY deep if you have seen the '04 film. A must see for any scifi, action, or animation fans. This is the new standard for CG film. There are a few hiccups, but I'll need to rewatch before I can compile a list of complaints.