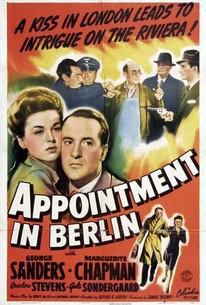 This wartime melodrama stars George Sanders as Keith Wilson, a disillusioned Britisher who becomes a "Lord Haw Haw"type at a Nazi radio station. All the time he's dispensing anti-British propaganda over the airwaves, however, Wilson is actually a secret agent in the employ of the His Majesty's government. It is Wilson's intention to use his intimate relationship with the Germans to expose a worldwide Nazi spy ring. Romance enter the picture in the form of Ilse Preissing (Marguerite Chapman), the sister of a Nazi agent whose decision to join Wilson's side results in her death. Veteran movie villainess Gale Sondergaard also appears in the film, cast against type as a courageous British intelligence agent. ~ Hal Erickson, Rovi

Wolfgang Zilzer
as Cripple
View All

Critic Reviews for Appointment in Berlin

There are no critic reviews yet for Appointment in Berlin. Keep checking Rotten Tomatoes for updates!

There are no featured reviews for Appointment in Berlin at this time.