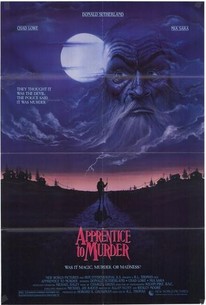 We're told that Apprentice to Murder is a true story. If so, we'll steer clear of the film's Pennsylvania Dutch locale in the future. A series of murders occur in a sleepy community, and suspicion immediately falls on the local "character": a self-styled faithhealer and mystic. Donald Sutherland plays this worthy, while Chad Lowe is cast as his nonplussed assistant. Though set in Pennsylvania, Apprentice to Murder was actually shot in Norway.

Chris Langman
as Patterson
View All

Critic Reviews for Apprentice to Murder

There's never a sense of the story really taking flight.

There are no featured reviews for Apprentice to Murder at this time.