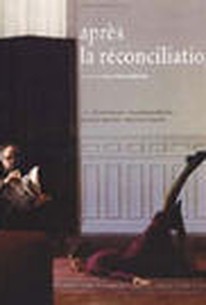 Four people discuss love and life, learning (and revealing) more about each other than they ever imagined in this intimate drama from director Anne-Marie Mieville. A middle-aged woman (Mieville) and her younger, attractive friend Cathos (Claude Perron) return home from an evening out with elderly Robert (Jean-Luc Godard). After Cathos makes a vain attempt to seduce Robert, the older woman steps out to buy cigarettes. She soon returns, and has brought an attractive young man named Arthur (Jacques Spiesser) along with her. Soon the four are discussing philosophy, literature, and their own intertwined relationships, as Robert and the older woman open up about the failings of their own romance. Some of the realism of Apres La Reconciliation can be attributed to the fact that Mieville and Godard are a long-time couple in real life; this also marks the fourth time they've acted together, though the first time was in a film directed solely by Mieville (Godard was a collaborator on the other three films in which they both appeared). ~ Mark Deming, Rovi

Critic Reviews for Après la Réconciliation (After the Reconciliation)

Like a smarter, more sophisticated pre-nouvelle vague short from the 1950s...

There are no featured reviews for Après la Réconciliation (After the Reconciliation) at this time.