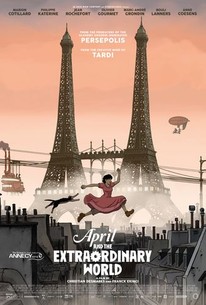 Critics Consensus: Bursting with a colorful imagination befitting its promise-packed title, April and the Extraordinary World offers spectacular delights for animation fans willing to venture off the beaten path.

Critics Consensus: Bursting with a colorful imagination befitting its promise-packed title, April and the Extraordinary World offers spectacular delights for animation fans willing to venture off the beaten path.

Critic Consensus: Bursting with a colorful imagination befitting its promise-packed title, April and the Extraordinary World offers spectacular delights for animation fans willing to venture off the beaten path.

From the producers of the Academy Award-nominated Persepolis and the mind of renowned graphic novelist Jacques Tardi comes a riveting sci-fi adventure set in an alternate steampunk world. Paris, 1941. A family of scientists is on the brink of discovering a powerful longevity serum when all of a sudden a mysterious force abducts them, leaving their young daughter April behind. Ten years later, April (Academy Award winner Marion Cotillard) lives alone with her cat, Darwin, and carries on her family's research in secret. But she soon finds herself at the center of a shadowy and far- reaching conspiracy, and on the run from government agents, bicycle-powered dirigibles and cyborg rat spies.

Anne Coesens
as Chimene
View All

As much as April and the Extraordinary World veers around a little too often and gets too self-indulgent with its exposition, the film effectively builds a whole other steampunk-inspired world in which viewers can get lost, gas masks and all.

Should appeal to precocious children... Adults may find it as derivative and simplistic as the steampunk aesthetic to which it's indebted, but for a gateway to more resonant cinema and literature, you could do worse.

April and the Extraordinary World will have your imagination doing somersaults and cartwheels.

"April and the Extraordinary World" is a visual delight, an animated French steampunk adventure that is smart, exciting and wonderfully weird.

In truth, the story is practically beside the point with all the spectacular visuals.

April and the Extraordinary World is a pure delight of wonder and invention.

An excellent animated feature with likeable characters, stunning and creative imagery, and a fast-paced and nicely complex storyline.

Pure enjoyment, but then I've always been in the bag for humanist sci-fi, lizards wearing robot armor, unusual and meticulous production design, and adventure stories where one of the heroes is a brainy woman and the other is a talking cat.

I loved it, and I think it is a film that will improve with each viewing.

It is compelling, not convoluted, and, best of all, takes place in an imagined steampunk world that is wondrous to behold.

The plot is disappointingly predictable, relying a lot more on Hollywood cliches than you'd expect . . . however, the film presents some of the most workable and stunning Steampunk imagery you're likely to find.

To be honest, the story is rather perfunctory. Ecological message movies preaching to save the planet are a dime a dozen. However beautifully hand drawn 2D animated features like this are not. Directors Franck Ekinci and Christian Desmares have fashioned a glorious universe in which the viewer can just get lost. Its strengths lie in visual delights that dazzle. They captivate the eye. My mind and emotions were less enthralled. The characters are cold and aloof, even the heroes. It's creative fun though. The action employs the character DNA of Japanese anime mixed with the science fiction of Jules Verne. Although a couple of humanoid lizards wearing robot armor were reminiscent of reptilian creatures in He-Man and the Masters of the Universe. Aesthetes who worship at the altar of the aforementioned passions will find themselves in cartoon nirvana. More casual fans of such things (this critic, for example) should be entertained as well, but on a somewhat lower level. fastfilmreviews.com