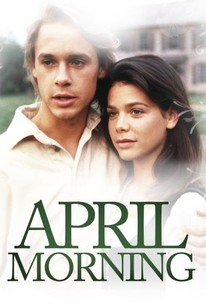 The morning invoked by the title of this made-for-TV drama is April 19, 1775. On that day, the "shot heard 'round the world" was fired, signalling the start of the American Revolution. Departing from known history, novelist Howard Fast (who wrote the book on which this film is based) proposes that the skirmish between the Colonial militia and the British troops on Concord Green, Massachusetts, was precipitated by fervent American patriot Solomon Chandler (Rip Torn). Later, Chandler commandeered guerilla raids against the British, activities which involved the film's main protagonist, 15-year-old Adam Cooper (Chad Lowe). Tommy Lee Jones, Robert Urich and Susan Blakely co-star in this Hallmark Hall of Fame presentation, originally telecast April 24, 1988.

There are no critic reviews yet for April Morning. Keep checking Rotten Tomatoes for updates!

There are no featured audience reviews yet. Click the link below to see what others say about April Morning!