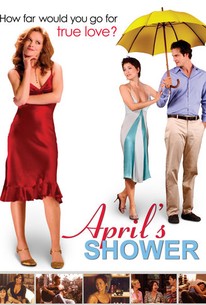 A woman negotiates the tricky etiquette of celebrating the wedding of her former girlfriend in this independent comedy. April (Maria Cina) and Alex (Trish Doolan) are close friends who have something of a past together -- both are lesbians, and they were lovers for several years. Alex is still attracted to April, but April has moved on -- so much so that April one day announces that she's going to marry Pauly (Randall Batinkoff), a pleasant but dull man who was introduced to April by her mother (Molly Cheek). Understandably, Alex is a bit taken aback when April asks her to be her maid of honor, but for the sake of their friendship she accepts. However, things get a bit frazzled when Alex has to put together a bridal shower for the woman she still loves. April's Shower was the first feature film from writer and director Trish Doolan, who also plays Alex.

The film has a pleasant spirit and lively dialogue, and what's more, seems to be coming from a specific cultural and geographical location.

It wrings almost no laughs or tears from this seemingly idiot-proof premise, taking 45 yawn-filled minutes to introduce its collection of severely stereotyped characters, whose conflicts then play out in excruciatingly predictable fashion.

If there is a single phrase that should strike fear in the hearts of innocent moviegoers, it is 'writer-director- producer-star.'

A lighthearted comedy about the outing of a bride-to-be and her five-year relationship with her maid of honor.

Suffers from a malady common to tiny indies of the let's-put-on-a-show variety -- it strains for irrepressibly nutty, but lands squarely in annoying.

How do you stop it, a movie that labors as stridently for sitcom feel-goodness?

April's Shower (its 2003 copyright reflects some shelf-rot) feels like a two-hour pilot for one of those mirthless CBS comedies.

With the preordained outcome of telegraphed in its opening scene, all that's left to enjoy of this mean-spirited melodrama, are politically-incorrect laughs at the expense of a bizarre cross-section of California kooks.

Unfortunately, the guest list includes a gaggle of clichés.

You'd think that having gone to the trouble of writing, directing, producing and starring in April's Shower, Trish Doolan would have something to say.

Any genuine emotions get smothered in inept humor.

There are no featured audience reviews yet. Click the link below to see what others say about April's Shower!