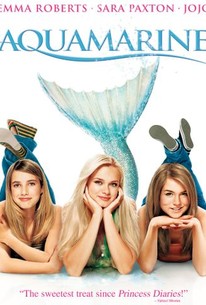 Two teenagers think they have problems until they come to the rescue of a girl with a fishy story to tell in this teen-oriented comedy. Thirteen-year-old Claire (Emma Roberts) and same-aged Hailey (Joanne "JoJo" Levesque) are two close friends living in Tampa, FL, who are facing a separation in a few weeks -- Claire's mother is a marine biologist who has been given a prestigious new job in Australia, meaning the girls are not likely to see much of each other again. While the girls wonder if there's anything they can do to avoid the inevitable, a storm breaks out and the waves toss an unusual example of sea life into Hailey's swimming pool -- Aquamarine (Sara Paxton), a teenaged mermaid who has some problems of her own. Aquamarine's father is a leader of the undersea world who has arranged for his daughter to marry a boy whom she doesn't care for. It seems Dad doesn't put much stock in the land-locked notion of love, and unless Aquamarine can prove to him that it's real, she will have to go through with the wedding. Claire and Hailey find Aquamarine, and discover that she fortunately sprouts legs when on dry land during the daylight hours; after learning of her romantic dilemma, they decide to help her by teaching her how to turn the head of Raymond (Jake McDorman), a cute lifeguard at the nearby beach. However, pretty Aquamarine learns her lessons well enough to make Cecilia (Arielle Kebbel), a mean girl with a crush on Raymond, jealous, leading her into a battle over the young man's affections, which Aquamarine has to win if she wants to avoid a loveless marriage. Aquamarine was the first feature film from director Elizabeth Allen.

Ozzie Devrish
as Carnie
View All

Unfortunately, the performances are often clunky and the art direction and CG are wanting, so anyone over the age of eight is likely to find it cheap around the edges. One for very little mermaids.

This fantasy comedy should entertain its pre-teen female market -- and repel those silly superficial boys (swoon).

For supervising grownups, its giddy leanings will induce seasickness.

It's not going to win an Oscar or anything. But I liked how it was actually made for tween girls.

This movie, in fact, is all about conformity.

This film is entirely harmless. It's utterly forgettable.

A script full of stupidities. [Full Review in Spanish]

Director Elizabeth Allen sets a nicely easy-breezy tone for Aquamarine, but her comic timing is sometimes shaky and she sadly cannot overcome the weaknesses of the script.

The movie scores a major victory in reaching its audience with the all-too-important message that they are fine just the way they are.

Kids seem to love the recognizable 'tween stars, but for the rest of us it's sort of like the cotton-candy scene%u2014we're not sure whether to eat it or rub our faces in it.

As shameless as trashy cookie-cutter studios movies will ever get.

The performances are charming, particularly JoJo Levesque, who is rapidly becoming the new Lindsay Lohan (only in a good way).

Too cliche and formulaic. I wouldn't recommend it even to the target audience.

Aquamarine is crap, that is basically all I have to describe it. The story was boring, the cast was terrible, and overall I never enjoyed it one bit, it was a bad movie.

A cute chick flick that also has you well up in tears of joy. Wasn't as bad as people say and it actually leaves you feeling really happy.